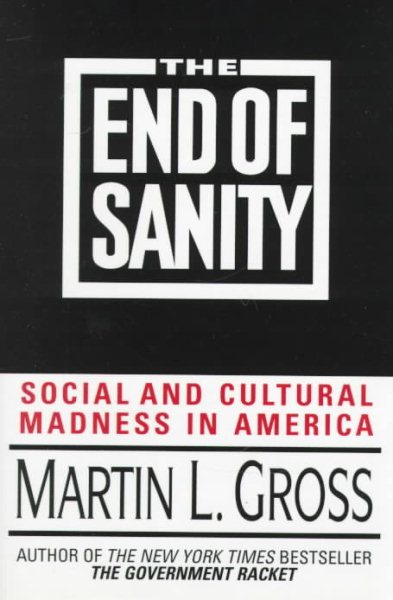 Profiles the New Establishment, identifying its infiltration into American institutions and explaining how its special-interest ideals are damaging to American culture Read More
At the University of Pennsylvania, separate dorms have been set up for minorities in the name of racial harmony...Among women soldiers returning on a troopship from Desert Storm, one in ten was pregnant...In New Jersey, dentists who are HIV-positive do not have to tell their patients...Grades are so inflated at Harvard that 85 percent of students graduate with "honors"...These absurdities are a sampling of the spreading decay in the American culture, a phenomenon best-selling author Martin L. Gross has dissected in The End of Sanity, a carefully researched examination of contemporary social madness. Watching the nation's tradition of fairness and individuality decline, he describes how it is giving way to a reign of conformity and error, including the insidious "Political Correctness." The crisis he describes goes beyond an attack on reason--actually heralding the end of sanity in American life.Spearheaded by what he calls the "New Establishment"--a coalition of anti-intellectual academics, bureaucrats, politicians, judges, military leaders, social workers--the concepts that made America great are being thrown onto the cultural scrap heap in favor of a new "experimental" society that favors the few and ignores the many.But, says the author, there is a cure for America's ailment once we have diagnosed how deeply social and cultural insanity has infected the nation. Gross gets to the root of the problem, including examining the "gods" of the New Establishment, then provides remedies that can reverse the wrong-headedness.The End of Sanity is the most explosive book yet from the New York Times bestselling author of The Government Racket. This new work is essential reading for everyone concerned about the direction in which our nation is headed--a much-needed guide on how to lead America out of the social and moral morass toward a greater, saner tomorrow. Read Less

Goodreads reviews for The End of Sanity: Social and Cultural Madness in America

National Suicide: How Washington Is Destroying the American...