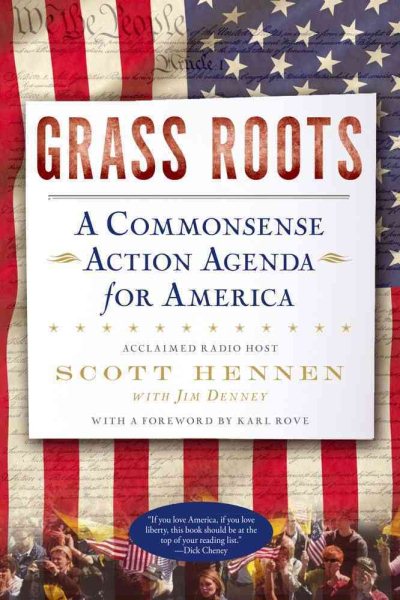 Collects vignettes about everyday Americans who have used creative methods to assume pro-active, political roles in their communities is compiled by a celebrated conservative radio personality and includes descriptions of controversial efforts being taken by Republican, Democrat, and Independent activists. Read More
Would you like to do your part in saving America? Grass Roots is a no-nonsense instruction manual that explains exactly what you can do. Scott Hennen—host and founder of the innovative Common Sense Club radio program—shows how everyday Americans just like you are making a difference for our country’s future. This down-to-earth handbook gives you clear, practical, effective actions you can take to preserve the American dream for your children and grandchildren. President Ronald Reagan once said, “All great change in America begins at the dinner table.” Today, most Americans struggle just to keep food on the dinner table. We are staggering under a crushing burden of big government, out-of-control spending, and towering federal debt. We have become tax slaves—and the people we sent to Washington to represent us are the very ones who sold us there. We’re angry—and rightly so. But ruling-class politicians have shrugged off our grassroots anger, calling it “Astroturf.” We’re tired of being ignored, patronized, and lied to by the very people who are supposed to be our “public servants.” Not since the original Boston Tea Party of 1773 have so many everyday Americans participated in such a significant display of righteous indignation and freedom-loving patriotism. For the first time in generations, ordinary hardworking, church-going Americans are carrying signs, gathering in large numbers, and making their voices heard. Big government, beware. A sleeping giant has awakened. Scott Hennen has drawn up a practical blueprint for change, a handbook for all of us who are ready to roll up our sleeves and do our part to restore America’s goodness—and greatness. Grass Roots is a political manifesto for every American who loves liberty and cares enough to get involved. Read Less

Reggie White in the Trenches: The Autobiography

Reggie White in the Trenches: The Autobiography

The Difference You Make: Changing Your World through the Imp...