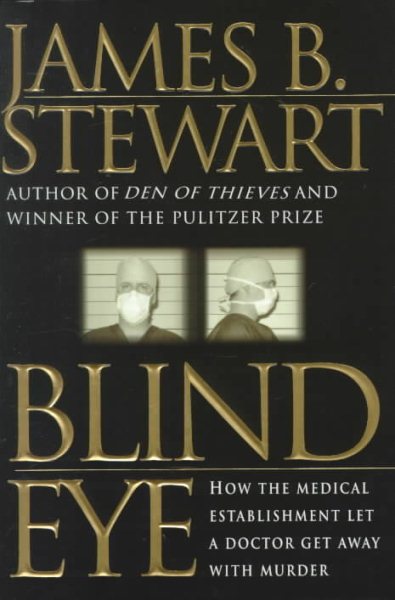 Shows how an apparently respectable young doctor murdered patients and poisoned co-workers while being consistently protected by an oblivious and dangerously secretive medical establishment Read More
Young, blond, handsome Dr. Swango seemed a godsend wherever he was hired to practice medicine. But acclaim would turn to disbelief, dismay, then horror, as the evidence mounted that he could actually be murdering his patients. Then, Dr. Michael Swango would leave that hospital -- only to be rehired at another. Today the FBI believes that Swango may be the most prolific serial killer in American history. In his brilliant, bestselling Den of Thieves, James Stewart exposed crime on Wall Street in the Roaring Eighties. Now, in Blind Eye, he takes readers into the closed world of America's medical establishment, where doctors repeatedly accept the word of fellow physicians over that of nurses, hospital workers and patients -- even after the horrible truth emerges. With prodigious investigative reporting, Stewart's mesmerizing account moves from the hospital rooms of the prestigious Ohio State University Hospitals to Illinois, South Dakota, New York and finally to a remote missionary hospital in Zimbabwe. There Stewart tracked down survivors, relatives of victims, shaken hospital workers -- and the evidence that may finally lead Swango to be charged with murder. Stewart brings to riveting life the story of a psychopathic physician and those who protected, trusted, pursued and, in some cases, loved him. There were powerful doctors who allowed Swango to practice even following an incident in which a patient was paralyzed after a nurse saw him inject the patient's I.V. There were hospital officials who failed to collect crucial evidence, making it impossible for a prosecuting attorney to pursue Swango for murder. Another doctor admitted Swango to a medical residency when he knew that Swango had been convicted of poisoning coworkers. Stewart recounts the story of a New York woman who saw Swango inject her husband, after which he lapsed into a coma and died. An attractive, vivacious nurse fell in love with Dr. Swango, became his fiancée, and may have learned too much about him. Blind Eye shows us the danger we face in a hospital system that too often puts appearances, reputation and potential liability ahead of patients' welfare -- and tells us what needs to be done to stop it. It exposes the alarming failure of a national policy that is supposed to monitor incompetence and misconduct in the medical profession, as well as the weakness of the federal legislation that is intended to protect the public. Dr. Michael Swango slipped easily through the cracks. Hospital doctors, often strangers when we meet them, are the people who will care for us and our loved ones. If Michael Swango could repeatedly slip through, who else has? James Stewart adds to his reputation as one of the country's most intrepid investigative reporters with this exposure of a dangerous doctor and a failed system. Read Less

Goodreads reviews for Blind Eye: How the Medical Establishment Let a Doctor Get Away with Murder