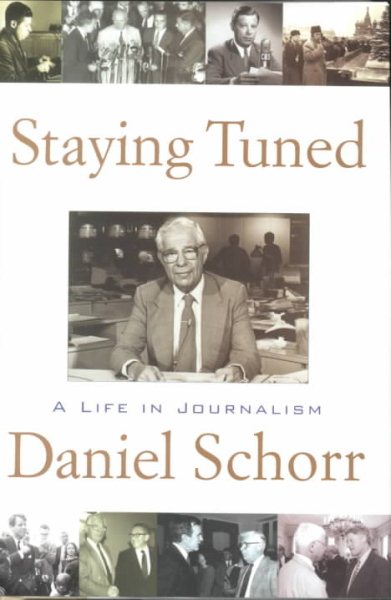 The author recalls his career from the golden age of broadcast news to the high-tech world of the twenty-first century as he recounts his involvement in a variety of historical events, including the civil rights movement, Watergate, and the rise of CNN. Read More
"In May 1999 Kevin Klose, president of National Public Radio, invited me to a meeting of the NPR board and surprised me with a bronze plaque, emblazoned 'Lifetime Achievement Award.' I responded that, ever the copy-reader, I wished to amend the wording to, 'Lifetime Achievement So Far...'" Thus Daniel Schorr, octogenarian, newsman, and last of the legendary Edward R. Murrow news team still active in journalism, let it be known that after six decades of reporting, digging out information, and finding himself the controversial subject of some stories, he is still fully engaged in the world-watching that has made him one of America's most honored journalists. He is both a national and an international eyewitness. At home, he has covered and analyzed major events from the McCarthy anti-Communist hearings of the 1950s to the Clinton impeachment hearings of the 1990s. As CBS's chief Watergate correspondent, he won three Emmys® for his coverage of that scandal -- during which he found himself on Nixon's "enemies" list. Abroad, he opened the CBS bureau in Moscow in 1955, arranged an unprecedented television interview with Soviet boss Nikita Khrushchev, and was on hand for every major European event from the founding of NATO to the building of the Berlin Wall. At home and overseas his no-holds-barred approach to covering the news landed him in trouble with the authorities. He may be one of the only journalists investigated by both the KGB and the FBI. In the 1970s, Schorr's revelations of CIA and FBI misdeeds brought him into a confrontation with Congress. Refusing to name his sources before the House Ethics Committee, he was threatened with jail for contempt -- a threat that was not carried out. He also came into confrontation with CBS, his employer, leading to his resignation. A multimedia journalist, Schorr has worked in newspapers, radio, and television. Today, he runs around less, but is still probing. In Staying Tuned, he reflects on the role of the media in our society, expressing concerns about television's assault on reality. As to how life has changed for him, Schorr says: "In my days as an investigative reporter, my motto was, 'Find out what they're hiding and tell those who need to know.' In my more sedentary days, the motto changed to, 'The people know a lot. Tell them what to make of it.'" Read Less

Goodreads reviews for Staying Tuned: A Life in Journalism

Within Our Reach: Breaking the Cycle of Disadvantage

Staying Tuned: A Life in Journalism