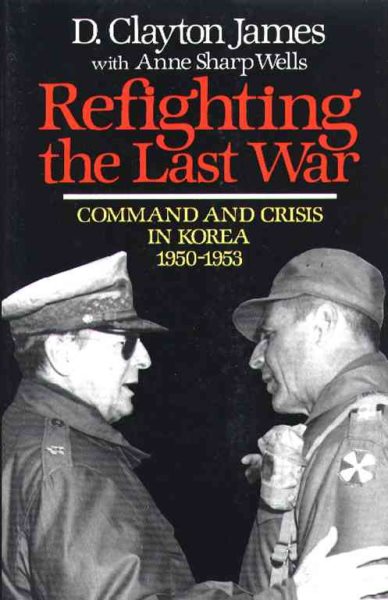 Examines American military decision-making during the Korean War, the role of the five key military leaders, and the issues confronting them Read More
Now, during the 40th anniversary of the Korean War, distinguished historian D. Clayton James offers a brilliant reinterpretation of that conflict. Focusing on the critical issue of command, he shows how the Korean War is a key to understanding American decision-making in all military encounters since World War II.Korea, the first of America's limited wars to stem the tide of world communism, was fought on unfamiliar terrain and against peasant soldiers and would become a template for subsequent American military engagements, especially Vietnam. And yet, the strategic and tactical doctrines employed in Korea, as well as the weapons and equipment, were largely left over from World War II. Each time a war is fought, D. Clayton James reveals, the lessons of the last war are applied in the new context, whether or not they are appropriate to the changed circumstances.James, the master biographer of MacArthur, uses studies of military crises to examine the American high command in the Korean War. He explores the roles, leadership, personalities, and prejudices of five key commanders - President Harry S. Truman; Generals Douglas MacArthur, Matthew B. Ridgway, and Mark W. Clark; and Admiral C. Turner Joy - and then looks at six crucial issues confronting them in that conflict.From the decision made by Truman, without congsessional approval, to commit United States forces to combat in Korea, to MacArthur's persistent fight for approval of his dangerous plan to assault Inchon, to the judgment to finally open truce negotiations, these turning points illuminate the American way of command in wartime. James analyzes the ground-level results and long-term implications of each choice, and sensitively explores the course that might had followed if other options had been taken.Probing the nature and consequences of these military resolutions, James shows how the conduct of the Korean War, like every new war, bears the imprint of the preceding one. In Korea, fortunately, the influence of State Department planners on military policy and strategy limited the full effect of World War II's legacy and the total destruction it portended. Read Less

Goodreads reviews for Refighting the Last War: Command and Crisis in Korea 1950-1953

A Time for Giants: The Politics of the American High Command...