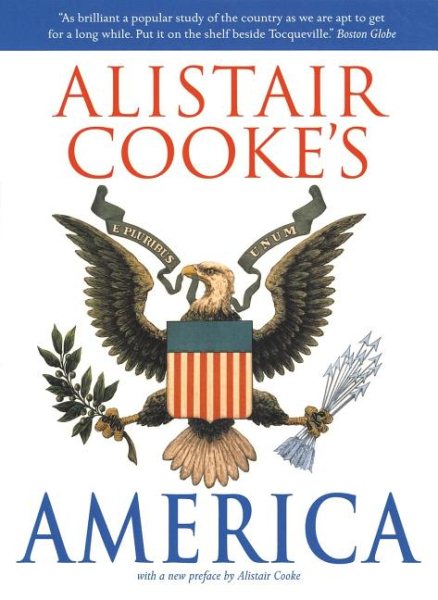 Updated in the aftermath of the devastating terrorist attacks on the World Trade Center and Pentagon, this classic and personal history of the United States provides an insightful glimpse of America's dynamic and colorful past, from the discovery of America by European explorers to modern times. Original. Read More
Classics stand the test of time, and Alistair Cooke’s history of America is a classic. Nearly three decades have passed since the original edition of America?based on journalist-historian Cooke’s extraordinarily popular thirteen-part television series?sold more than a million copies. Yet Cooke’s view of America’s dynamic past and its impact upon the always-changing present continues to provide striking insights into the singular character of a nation. Those thirty years since award-winning America first rose to the top of best-seller lists have themselves wrought further dramatic changes. Presidents have been impeached, economies have toppled, empires have collapsed, and towers have fallen. In light of such events, Cooke has written for this new edition a compelling introduction and final chapter that bring his story of America up to date with the wisdom of the inimitably grand old man of correspondents. And what a story this book tells. From the discovery of America by European explorers to modern times; from the fighters for independence to the pioneers who tamed the West; from the slaves who fled to freedom to the huddled masses that sought a new life in the New World. And through it all, Cooke describes the essential forces that make America work so vitally. Updated in light of the September 11th tragedy, this new edition is complimented with full-color illustrations throughout. ?The first and maybe the finest, tribute to the nation.”?Newsweek ?A panoramic book, traveling fast and high, and the view it gives of our land and its people is exhilarating.”?Atlantic Monthly Read Less

The Patient Has the Floor