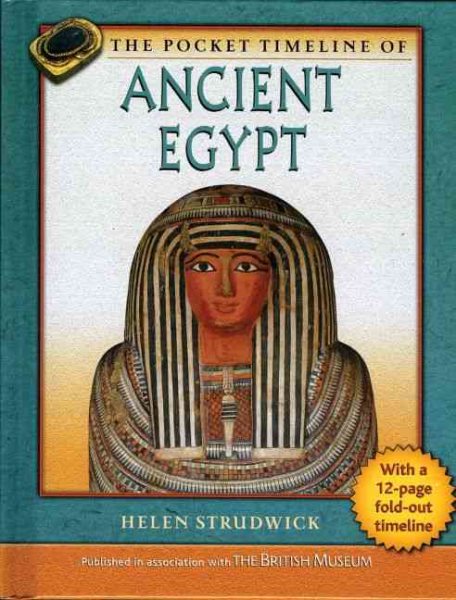 Provides a brief, chronological history of ancient Egypt from 7500 B.C. to 30 B.C., including a tear-out timeline that closely follows the book. Read More
After thousands of years, ancient Egypt's monuments, tombs, religion, and way of life still capture the imagination. The Pocket Timeline of Ancient Egypt is a beautifully illustrated guide to this rich and fascinating civilization, from prehistoric times to the reign of Cleopatra. Each chapter of the lively and engaging 32-page book provides a quick but rewarding account of a different period of Egypt's history. Readers learn about life and death in the area around the Nile, the development of farming and writing, and the astonishing engineering achievements of these people. The book is illustrated with dozens of color photos of ancient monuments and atifacts. We see the delicately inscribed seal of queen Sobekneferu; the small statues known as Shabti, which were buried with their owners and were believed to be ready to awake and work in fields when their master demanded it; and the false door in the tomb of Pepy II, constructed to allow his spirit to pass between the worlds of the living and the dead. The eye-catching 12-page fold-out timeline, which can be detached for wall display, unfolds over the same 3,000 years of history as the book, presenting a vivid account of the major events, achievements, and personalities of the ancient Egyption world. Read Less

Goodreads reviews for The Pocket Timeline of Ancient Egypt

Thebes in Egypt: A Guide to the Tombs and Temples of Ancient...

My Little Book of Special Prayers