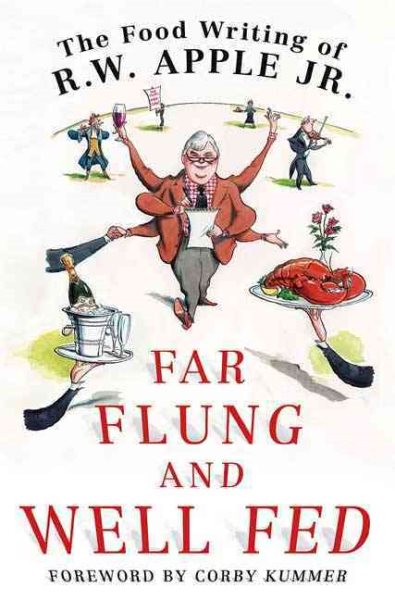 Collects food essays on topics ranging from soft-shelled crab and wild morels to the fresh fish of Venice and the street food of Vietnam. Read More
Celebrated journalist R. W. (“Johnny”) Apple was a veteran political reporter, a New York Times bureau chief and an incisive and prolific writer. But the role he was most passionate about was food anthropologist. Known both for his restless wideopen mind and an appetite to match, Apple was also a culinary scholar: witty, wide-ranging and intensely knowledgeable about his subjects. Far Flung and Well Fed is the best of legendary Times reporter Apple’s food writing from America, England, Europe, Asia and Australia. Each of the more than fifty essays recount extraordinary meals and little-known facts, of some of the world’s most excellent foods —from the origin of an ingredient in a dish, to its history, to the vivid personalities—including Apple’s wife, Betsey—who cook, serve and eat those dishes. Far Flung and Well Fed is a classic collection of food writing— lively, warm and rich with a sense of place and taste—and deserves to join the works of A.J. Liebling, Elizabeth David, M.F.K. Fisher and Calvin Trillin on the bookshelf. Read Less