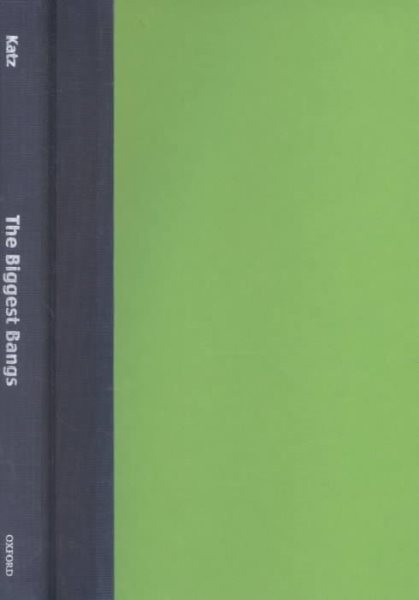 Describes gamma-ray bursts and the mysteries surrounding them. Read More
Gamma-ray bursts are the most violent events since the birth of the universe. They are about ten times more energetic than the most powerful supernovae. At their peak, gamma-ray bursts are the brightest objects in space, about 100,000 times brighter than an entire galaxy. And yet until recently these titanic eruptions were the most mysterious events in astronomy.In The Biggest Bangs, astrophysicist Jonathan Katz offers a fascinating account of the scientific quest to unravel the mystery of these incredible phenomena. With an eye for colorful detail and a talent for translating scientific jargon into plain English, Katz ranges from the accidental discovery of gamma-ray bursts (by a Cold War satellite system monitoring the Nuclear Test Ban Treaty) to the frustrating but ultimately successful efforts to localize these bursts in distant galaxies. He describes the theories, the equipment (the most recent breakthrough was made with a telescope you could carry under your arm), and the pioneers who have finally begun to explain these strange bursts. And along the way, he offers important lessons about science itself, arguing that "small science" is as valuable as institutionalized "big science," that observations are more the product of advances in technology than of theory, and that theory is only "the concentrated essence of experiment."With the advent of the space age a mere 40 years ago, we have grown used to strangeness in the universe--and confident in science's ability to explain it. InThe Biggest Bangs, Jonathan Katz shows that there are still wonders out there that exceed the bounds of our imagination and defy our ability to understand them. Read Less

Goodreads reviews for The Biggest Bangs: The Mystery of Gamma-ray Bursts, the Most Violent Explosions in the Universe

The Misanthrope and Tartuffe

The Wild Country of Mexico