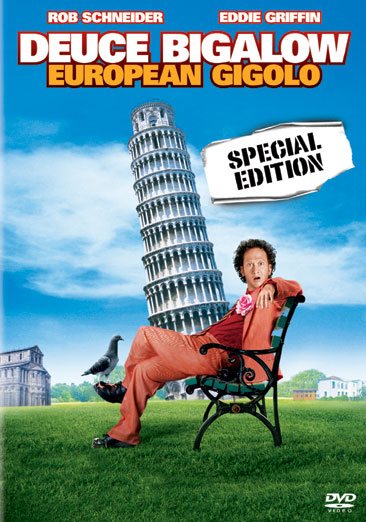 Deuce travels to Europe and becomes a gigolo to raise money for a friend accused of murder. Read More
The film opens with Deuce Bigalow (Schneider) at the beach doing research on fish, where he is bullied by a couple of kids. When he gets a call from his old friend, T.J. Hicks (Griffin), with an invitation to join him in Amsterdam, Deuce accepts. Deuce shows up in Europe only to find that a mysterious killer is knocking off the city's man-whores. Worse, T.J. is implicated, so Deuce is forced to go undercover and search for the killer on his own, hoping to clear his friend's name. Meanwhile, T.J. comes up with a vast array of creative synonyms for gigolos and their equipment. Everything comes to a head at the 73rd annual Man Whore Awards, where Deuce proves his mettle and things fall together in surprising ways. Read Less