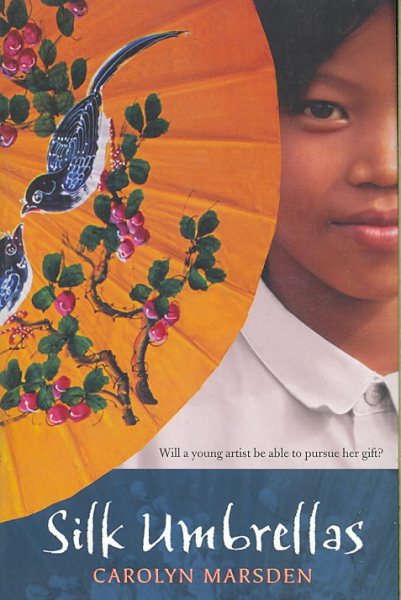 Eleven-year-old Noi worries that she will have to stop painting the silk umbrellas her family sells at the market near their Thai village and be forced to join her older sister in difficult work at a local factory instead. Read More
"A sensitive portrayal of a family in Thailand. . . . This gracefully told story will resonate with many young readers." — BOOKLIST (starred review)Eleven-year-old Noi is learning to paint like her grandmother. She and her older sister, Ting, spend many rapt hours in the jungle watching as Kun Ya paints delicate silk umbrellas to sell at the market. But one day Kun Ma and Kun Pa announce that Ting must start working at a local radio factory to help support the family. As the days and weeks pass, Noi anxiously sees her own fate reflected in her sister’s constricting world. Can Noi find a way to master her fear of failure and stand up for her gift — and Kun Ya’s tradition — before the future masters her?An American Library Association Top Ten Art Book for Youth SelectionA Bank Street College Best Children’s Book of the YearTwo starred reviews (BOOKLIST, PUBLISHERS WEEKLY) Read Less