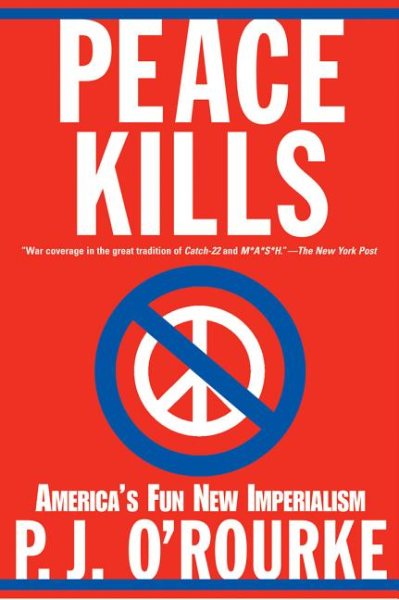 One of the nation's most controversial journalists and humorists offers another hard-hitting survey of the foibles of American foreign policy, recounting his experiences among consumers in Kuwait, in security obsessed airports around the globe, and in Kosovo, where "NATO tried to start World War III without hurting anyone." Reprint. 100,000 first printing. $75,000 ad/promo. Read More
With his latest national best seller, Peace Kills, P.J. O'Rourke casts his ever-shrewd and mordant eye on America's latest adventures in warfare. Imperialism has never been more fun.To unravel the mysteries of war, O'Rourke first visits Kosovo: "Wherever there's injustice, oppression, and suffering, America will show up six months later and bomb the country next to where it's happening." He travels to Israel at the outbreak of the intifada. He flies to Egypt in the wake of the 9/11 terrorists' attacks and contemplates bygone lunacies. "Why are the people in the Middle East so crazy? Here, at the pyramids, was an answer from the earliest days of civilization: People have always been crazy." He covers the demonstrations and the denunciations of war. "A moral compass needle needs a butt end. Wherever direction France is pointing-toward collaboration with Nazis, accommodation with communists, existentialism, Jerry Lewis, or a UN resolution veto-we can go the other way with a quiet conscience." Finally he arrives in Baghdad with the U.S. Army and, standing in one of Saddam's palaces, decides, "If a reason for invading Iraq was needed, felony interior decorating would have sufficed." Read Less