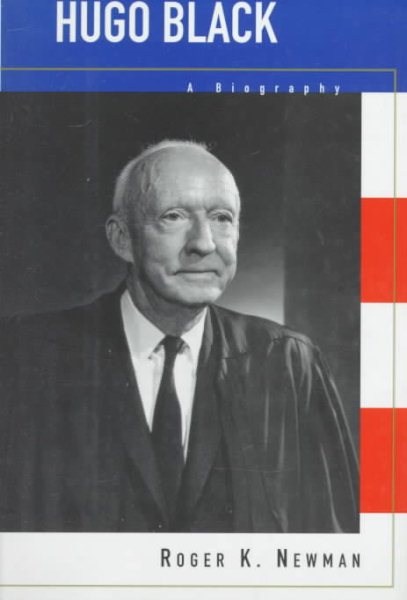 Recounts Black's life from his childhood in Alabama and his membership in the Ku Klux Klan to his years on the Supreme Court, where he was known for his emphasis on the the Bill of Rights, and especially the First Amendment Read More
Hugo Black's odyssey was long, varied, unlikely, and remarkably successful. It began in 1886 in the Alabama hill country and ended in 1971, when Americans were demonstrating in the streets. As a United States senator from 1927 to 1937 and then for thirty-four years on the United States Supreme Court as its most passionate civil libertarian, Black fought for the rights and welfare of all people.Here is the first full-scale biography of this commanding figure. Never before has the story been so richly told. Roger Newman reveals much we did not know - about Black's activities in the Ku Klux Klan and the furor over his appointment by FDR to the Supreme Court. He takes us behind the scenes at the Court and into its secret conferences, showing us the preparation of opinions and explaining the relationships among the justices.Black is seen as he was - a brilliant trial lawyer, the investigating senator called by one reporter "a walking encyclopedia with a Southern accent," and the wily politician and astute justice who led the redirection of American law toward the protection of the individual.Black's story is also an American story, filled with vivid accounts of his friendships and often dramatic encounters with FDR, Harry Truman, Felix Frankfurter, William O. Douglas, Earl Warren, Lyndon Johnson, and William J. Brennan, Jr. Newman gives us a fascinating portrait of Black - the captivating charmer with the steel backbone and stronger will, and the self-taught, scholarly, cracker populist who termed himself "a rather backward country fellow."More than a decade in the making, drawing upon an astonishing array of sources, including Black's family papers, to which Newman had exclusive access, and more than one thousand interviews, this moving, instructive biography is written with grace, sweep, and verve. Read Less