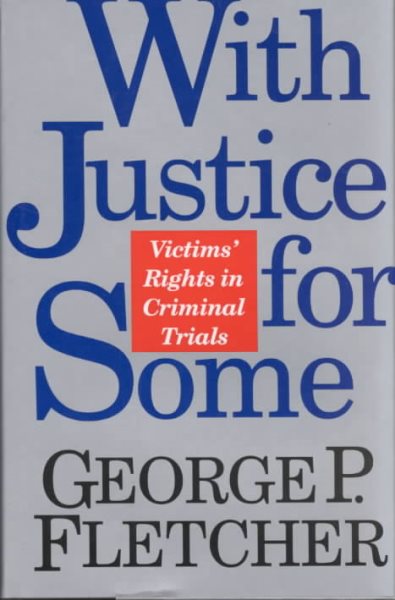 A powerful examination of what’s wrong with our criminal justice system and what needs to be done to fix it. Read More
On November 27, 1978, councilman Dan White bypassed the San Francisco City Hall security systems by crawling through a basement window with a loaded .38. By the time he left City Hall that day, Mayor George Moscone and openly homosexual councilman Harvey Milk had been shot dead—point blank. Convicted of manslaughter, not first degree murder, Dan White and the infamous ”Twinkie defense” entered the legal vocabulary. The Harvey Milk case also, more ominously, was the beginning of a trend in criminal trials that has led to such disturbing verdicts as those in the recent Lorena Bobbitt, Rodney King, and Menendez brothers trials.With Justice for Some: Victims’ Rights in Criminal Trials, a ground-breaking book by renowned legal scholar George P. Fletcher, is the first effort to examine the new political trial. In the high-profile, politicized trials of the 1990s, punishment becomes a means of self-vindication for disenfranchised groups who identify with the victims. Criminal trials have become the focal points for activist groups who have suffered in the palace of justice, and who now take their grievances to the street. Gay men stream out of the Castro and riot after the unexpected manslaughter verdict in the slaying of Harvey Milk. Blacks and Hispanics rebel in Los Angeles after the first Rodney King verdict, leaving South-Central L.A. in ruins. Hasidic Jews march and scream their bitter disappointment after the surprise acquittals in trials for the murders of Meir Kahane and Yankel Rosenbaum. Feminists fill the streets to ”take back the night” and toughen our laws against rape.With his insightful, angry critique, George Fletcher confronts the flaws in America’s system of criminal prosecution. He explains exactly how such miscarriages of justice have become endemic. The primary function of today’s criminal trials, Fletcher argues, is no longer to determine guilt of condemn evil. It is rather to understand the mind of the criminal, to camouflage the crime as less heinous and less deserving of punishment. Under the influence of psychiatric experts, criminal evil becomes ”deviant behavior.” Cold-blooded murderers are treated as abused children. Blaming the victim, defense lawyers picture Rodney King as ”in control” of his beating and claim that Yankel Rosenbaum ”sacrificed himself.” Judges have lost control over their courtrooms, giving lawyers free reign to divert jurors from the facts with outlandish theories that portray their clients as the supposed victims.No one could have anticipated the effect that tabloid television, public relations firms working for accused murderers, and jury consultants who use marketing skills and opinion polls to stack juries would have on the system that is supposed to guarantee our liberties. The abandoned victims now cry out for reform. With critical sophistication and a profound understanding of criminal law here and abroad, George Fletcher offers sensible, realistic suggestions for reform. An urgent call for victims’ rights, With Justice for Some engages the reader with an evocative portrayal of what’s wrong with the system and what needs to be done to fix it. Read Less

Goodreads reviews for With Justice For Some: Victims' Rights In Criminal Trials

A Crime of Self Defense: Bernhard Goetz and the Law on Trial

Loyalty: An Essay on the Morality of Relationships