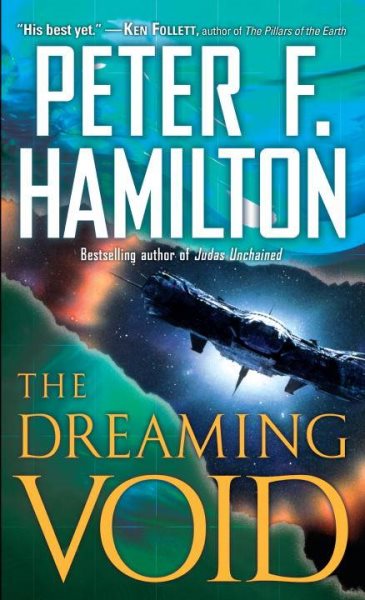 In a high-tech, far future world, the Void, a massive black hole lying at the center of the Intersolar Commonwealth universe, projects dreams that are transforming the lives of those who experience them. Read More
Reviewers exhaust superlatives when it comes to the science fiction of Peter F. Hamilton. His complex and engaging novels, which span thousands of years&;and light-years&;are as intellectually stimulating as they are emotionally fulfilling. Now, with The Dreaming Void, the first volume in a trilogy set in the same far-future as his acclaimed Commonwealth saga, Hamilton has created another ambitious and gripping space epic. The year is 3589, fifteen hundred years after Commonwealth forces barely staved off human extinction in a war against the alien Prime. Now an even greater danger has surfaced: a threat to the existence of the universe itself. At the very heart of the galaxy is the Void, a self-contained microuniverse that cannot be breached, cannot be destroyed, and cannot be stopped as it steadily expands in all directions, consuming everything in its path: planets, stars, civilizations. The Void has existed for untold millions of years. Even the oldest and most technologically advanced of the galaxy&;s sentient races, the Raiel, do not know its origin, its makers, or its purpose. But then Inigo, an astrophysicist studying the Void, begins dreaming of human beings who live within it. Inigo&;s dreams reveal a world in which thoughts become actions and dreams become reality. Inside the Void, Inigo sees paradise. Thanks to the gaiafield, a neural entanglement wired into most humans, Inigo&;s dreams are shared by hundreds of millions&;and a religion, the Living Dream, is born, with Inigo as its prophet. But then he vanishes. Suddenly there is a new wave of dreams. Dreams broadcast by an unknown Second Dreamer serve as the inspiration for a massive Pilgrimage into the Void. But there is a chance that by attempting to enter the Void, the pilgrims will trigger a catastrophic expansion, an accelerated devourment phase that will swallow up thousands of worlds. And thus begins a desperate race to find Inigo and the mysterious Second Dreamer. Some seek to prevent the Pilgrimage; others to speed its progress&;while within the Void, a supreme entity has turned its gaze, for the first time, outward. . . . Read Less

Goodreads reviews for The Dreaming Void (Commonwealth: The Void Trilogy)