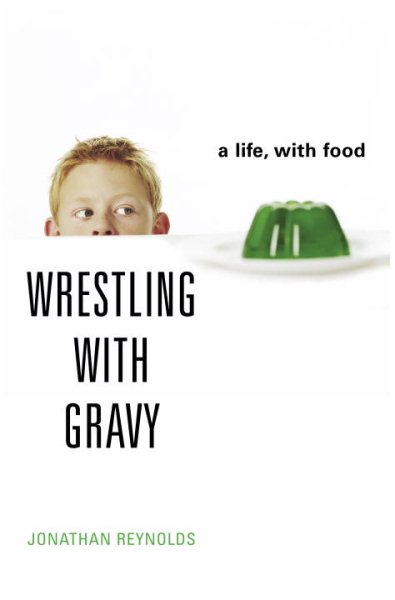 Accompanied by a series of delectable recipes, a culinary memoir by the New York Times Magazine food columnist examines the role of food in his life, family, friendships, and romance, offering a series of droll, sometimes poignant anecotes about baseball, deep-fried Thanksgiving turkeys, dating, and the final illness of his cousin, Lee Remick. 30,000 first printing. Read More
In this inviting feast of a memoir, former New York Times food columnist Jonathan Reynolds dishes up a life that is by turns hilarious and tender–and seasoned with the zest of cooking, family, eating, and lounging around various tables in tryptophanic stupors. Growing up on Manhattan’s Upper East Side, a child of material privilege and emotionally distant parents, young Jonathan discovers that food serves as a catalyst for adventure, a respite from loneliness, and a fail-safe way to navigate his often eccentric surroundings. When Jonathan is thirteen, his uncle Bus, a surrogate father of sorts, treats him to his first fine dining experience, at the old Westbury Hotel on Madison Avenue. The suspicious teen orders pheasant under glass–and from the moment the glass dome is lifted, Reynolds’s culinary curiosity takes off. Always absorbing, often hilarious, and surprisingly affecting, Wrestling with Gravy is full of wonderful characters and anecdotes. With droll self-effacement and a sharp eye for detail, Reynolds relives the time that his own father made a move on his girlfriend during a meal at Maxim’s in Paris; extols the surprising virtues of baseball stadium cuisine (with the exception of New York); and recounts how he once whipped up a seductive meal for a woman, only to have her excuse herself after dessert because she had another date lined up, buffet-style, later in the evening. Even on a glum Christmas day in New York City, or at the deathbed of his dear cousin the actress Lee Remick, food offers solace and a cathartic sense of home.Rare among culinary memoirs, Wrestling with Gravy speaks eloquently about food without affectation, while striking a note of cosmic comedy and honest regret. And of course, the recipes are all here, too–from a perfect water-smoked Thanksgiving turkey to a barbecued Chinese duck, from an old-fashioned malted to Flaming Babas au Armagnac. Like a truly great meal, Wrestling with Gravy will entertain and satisfy any reader’s appetite.For five years, Jonathan Reynolds brought oxygen to the food page of The New York Times Magazine. He was smart and buoyant as he rummaged around in memory's trunk for food-worthy anecdotes to chew upon. The pieces were highly personal, showcasing his quirks and irreverence as much as any foodstuff. His theatrics (fittingly –- Reynolds is a seasoned actor and playwright) were endearing; no surprise, then, when readers took personal interest in his passage, with its hints of darkness lurking amid the drollery.Reynolds' memoir, "Wrestling With Gravy," is as consistently entertaining, in a grim way, as his columns, unveiling the many familial, romantic and professional land mines he discovered –- too late! –- under nearly every step he took, each fitted with emblematic recipes, balms for his wounds: "Food is controllable, while most of life isn't."His father was absent, off performing "entrepreneurial calisthenics"; his mother was lost to depression. There were boarding school expulsions, and a jail stay prompted by his youthful infatuation with actress Kim Novak. Hollywood was a bitter pill –- "The stars sip their strawsful of sugarless broth fumes and vapor of fetal watercress leaf helicoptered to their trailers" –- part and parcel of his "insanely and unrealistically ambitious" screenwriting career. Friends and family died; his marriage went south.The gloom is beveled, thankfully, by his children, a guiding-star uncle, a second marriage, sweet playwriting success, all artfully etched with a hand as graceful as his progress clubfooted. (Said clubfoot precedes him during an ill-advised, weirdly nescient chapter analyzing American politics, but then half of Reynolds' charm is his flaws.)Not to forget the associative, heartening foods, like Kubbervik Scallops, Undocumented Tamales and Stargazy Pie, with sardine snouts poking through the puff pastry. If hunger is the best sauce, a spoonful of agony worked wonders for Reynolds. –The Atlanta-Journal Constitution Read Less

Goodreads reviews for Wrestling with Gravy: A Life, with Food

Be a Friend to Trees (Let's-Read-and-Find-Out, Stage 2)