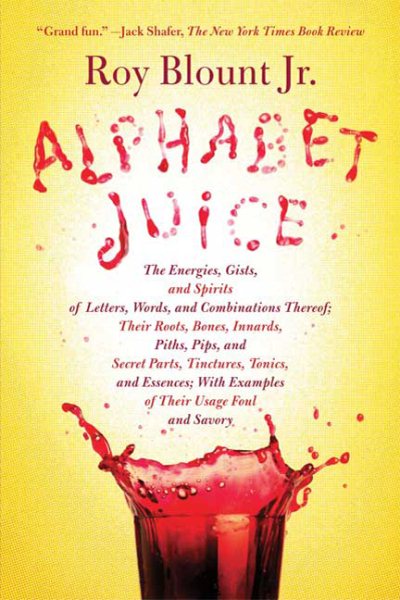 Alphabet Juice derives an organic take on language that is unlike, and more fun than, any other. Read More
"If everybody's first English teacher were Roy Blount Jr., we might still be trillions in debt, but we would be so deeply in love with words and their magic . . . that we'd hardly notice." —Chris Tucker, The Dallas Morning NewsAfter forty years of making a living using words in every medium except greeting cards, Roy Blount Jr. still can't get over his ABCs. In Alphabet Juice, he celebrates the juju, the crackle, the sonic and kinetic energies, of letters and their combinations. He has a strong sense of right and wrong, but he is not out to prescribe proper English. His passion is for questions such as these: Did you know that both mammal and matter derive from baby talk? Have you noticed how wince makes you wince?Three and a half centuries ago, Thomas Blount produced his Glossographia, the first dictionary to explore derivations of English words. This Blount's Glossographia takes that pursuit to new levels. From sources as venerable as the OED and as fresh as Urbandictionary.com, and especially from the author's own wide ranging experience, Alphabet Juice derives an organic take on language that is unlike, and more fun than, any other."Amusing, bemusing, and smart as hell." —Daniel Okrent, Fortune"Danced in Blount's arms, English swings smartly." —Jack Shafer, The New York Times Book Review"Gracefully erudite and joyous." —Katherine A. Powers, The Boston Sunday Globe Read Less

Goodreads reviews for Alphabet Juice: The Energies, Gists, and Spirits of Letters, Words, and Combinations Thereof; Their Roots, Bones, Innards, Piths, Pips, and Secret ... With Examples of Their Usage Foul and Savory

Save Room for Pie: Food Songs and Chewy Ruminations