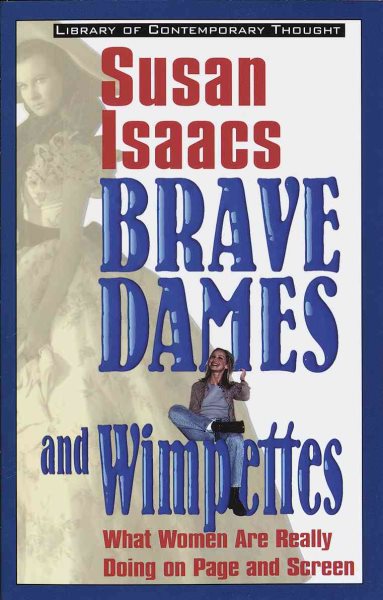 Explores the influence of feminism on today's actresses and female authors, showing how it appears and disappears in the least likely places Read More
Why are Jane Eyre, Marge Simpson, and Buffy the Vampire Slayer "brave dames"? What makes Ally McBeal, Madame Bovary, and the good wife Beth from Fatal Attraction "wimpettes"?In this thoroughly witty, incisive look at the role of women on screen and page, Susan Isaacs argues that assertive, ethical women characters are losing ground to wounded, shallow sisters who are driven by what she calls the articles of wimpette philosophy. (Article Eight: A wimpette looks to a man to give her an identity.) Although female roles today include lawyers like Ally McBeal and CEOs like Ronnie of Veronica's Closet, they are wimpettes nonetheless. A brave dame, on the other hand, is a dignified, three-dimensional hero who may care about men, home, and hearth, but also cares--and acts--passionately about something in the world beyond. Brave dames' stories range from mundane (Mary Richards in The Mary Tyler Moore Show) to romantic (Francesca in The Horse Whisperer) to fantastic (Xena: Warrior Princess), but whatever they do, they care about justice and carry themselves with self-respect and decency. For a Really Brave Dame, think Frances McDormand as the tenacious, pregnant police chief in Fargo. Isaacs's unmistakable love of fiction and film shines through even her most scathing wimpette assessments. In the end, she urges us to become "more thoughtful critics." The artist, she says, has the right to create whatever he or she pleases--and we have the right "to applaud or to yell, 'Hey, this stinks!' " If we do so, not only will fiction be improved, but so too might real life. Read Less

Goodreads reviews for Brave Dames and Wimpettes: What Women Are Really Doing on Page and Screen (Library of Contemporary Thought)

As Husbands Go: A Novel