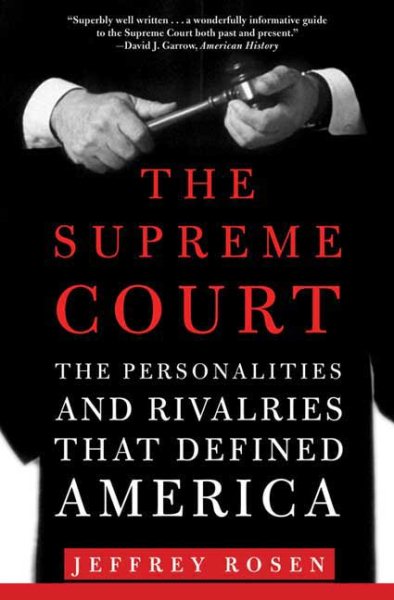 A compelling character-driven history of the Supreme Court traces its evolution from the perspective of the personal, philosophical, political, and judicial rivalries on the bench that transformed the law--from the conflict between Chief Justice John Marshall and Thomas Jefferson, to present-day tensions between conservatives William H. Rehnquist and Antonin Scalia. Reprint. 50,000 first printing. Read More
"Superbly well written . . . a wonderfully informative guide to the Supreme Court both past and present."—David J. Garrow, American HistoryJeffrey Rosen recounts the history of the Supreme Court through the personal and philosophical rivalries that have transformed the law—and by extension, our lives. With studies of four crucial conflicts—Chief Justice John Marshall and President Thomas Jefferson; post–Civil War justices John Marshall Harlan and Oliver Wendell Holmes; liberal icons Hugo Black and William O. Douglas; and conservative stalwarts William H. Rehnquist and Antonin Scalia—Rosen brings vividly to life the perennial rivalry between those justices guided by strong ideology and those who cared more about the court as an institution, forging coalitions and adjusting to new realities. He ends with a revealing conversation with Chief Justice John Roberts, who is attempting to change the court in unexpected ways. The stakes, he shows, are nothing less than the future of American jurisprudence. Read Less

The Unwanted Gaze: The Destruction of Privacy in America

The Supreme Court: The Personalities and Rivalries That Defi...

The Most Democratic Branch: How the Courts Serve America (In...