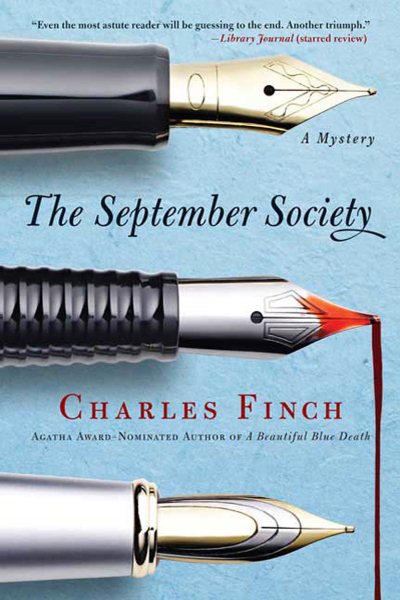 Amateur detective and Victorian gentleman Charles Lenox heads for his alma mater at Oxford to investigate the disappearance of a student and encounters a series of bizarre clues, including a card bearing the name The September Society. Read More
From the critically acclaimed author Charles Finch comes a novel "reminiscent of Ruth Rendell and Elizabeth George" (Booklist), in which Charles Lenox revisits his alma mater of Oxford to investiage one student's disappearance and another's murder--tied to a secret group known as The September Society. In the small hours of the morning one fall day in 1866, a frantic widow visits detective Charles Lenox. Lady Annabelle's problem is simple: her beloved son, George, has vanished from his room at Oxford. When Lenox visits his alma mater to investigate he discovers a series of bizarre clues, including a murdered cat and a card cryptically referring to "The September Society." Then, just as Lenox realizes that the case may be deeper than it appears, a student dies, the victim of foul play.What could the September Society have to do with it? What specter, returned from the past, is haunting gentle Oxford? Lenox, with the support of his devoted friends in London's upper crust, must race to discover the truth before it comes searching for him, and dangerously close to home. Read Less

A Death in the Small Hours: A Mystery (Charles Lenox Mysteri...