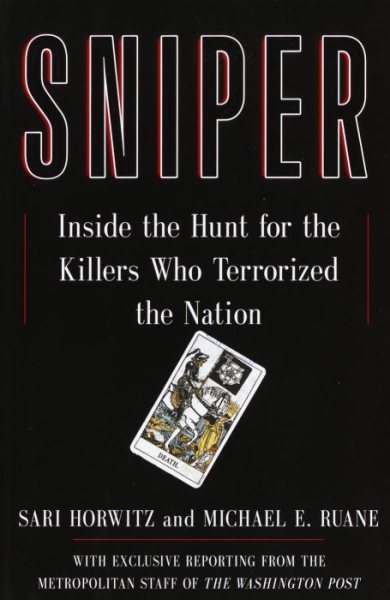 Recounts the sniper killings that terrorized Washington, D.C., and the surrounding area that left ten people dead, and follows the manhunt for accused killers John Muhammad and Lee Malvo. Read More
For more than three weeks, the nation watched in disbelief as Washington, D.C., and its surrounding suburbs were held hostage by anonymous gunmen shooting innocent civilians at random. Sniper is the account of those alleged gunmen, John Muhammad and Lee Boyd Malvo, and the massive manhunt that ended with their capture by a heavily armed SWAT team in an early-morning raid at an interstate highway rest stop.Two Washington Post reporters, Sari Horwitz and Michael E. Ruane, retrace the steps of Muhammad and Malvo from their first meeting on the island of Antigua to Malvo's defiant confession in a Virginia jail. Drawing on exclusive reporting about that confession, internal police documents, and a wide range of law-enforcement sources, Horwitz and Ruane track in remarkable detail the murderous trail Muhammad and Malvo are accused of having followed to the Washington area and reconstruct the eerie way in which the two moved invisibly around the nation's capital in the midst of one of the largest police investigations in U.S. history.Horwitz and Ruane also take you inside the police command center where local and state police, joined by the federal government's most experienced crime fighters, worked desperately to stop the killings, unaware that a fundamental error - investigators were wrongly fixated on a white van - was allowing Muhammad and Malvo to slip through the dragnet. We meet FBI negotiators, veteran detectives, forensics experts, prosecutors, and politicians who faced perhaps the biggest challenge of their careers as they confronted frustrating setbacks, logistical nightmares, and the overwhelming pressure of a high-stakes investigation. In a fast-paced narrative that outdoes even the most acclaimed television cop shows, Sniper recounts the extraordinary police work that enabled investigators to quickly exploit the clues handed to them by Muhammad and Malvo that finally led to their arrest. Read Less

Goodreads reviews for Sniper: Inside the Hunt for the Killers Who Terrorized the Nation

Sunlight and Shadows: Portraits of Priorities for Living and...

Imagine: What America Could Be in the 21st Century