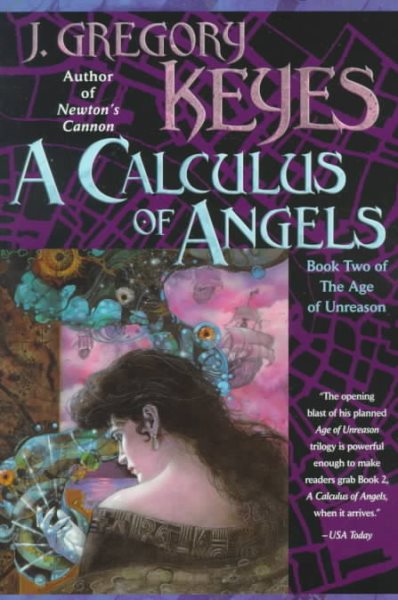 Sir Isaac Newton and Benjamin Franklin must combine forces against a wave of black magic that plays havoc with eighteenth-century Europe and threatens a repeat of the dark ages unless the pair can come up with a plan Read More
Newton's Cannon, the critically acclaimed first volume in J. Gregory Keyes's Age of Unreason series, brilliantly combined the best of alternate history, fantasy, and science fiction in a bravura reimagining of the tempestuous eighteenth century. Now, Keyes triumphantly adds to his masterpiece in the making . . .A CALCULUS OF ANGELS1722: A second Dark Age looms after the devastating impact of an asteroid, unnaturally drawn to Earth by dire creatures who plot against the world of men. Yet this destruction is just the opening salvo in a war of annihilation.Sir Isaac Newton and his young apprentice, Benjamin Franklin, have taken refuge in ancient Prague, seeking the secrets of the aetheric beings whose vast powers and new sciences have so nearly destroyed humanity . . . yet who may prove to be its last, great hope.But their safety is tenuous, as Peter the Great marches his unstoppable forces across Europe. And half a world away, Cotton Mather and Blackbeard the pirate lead a party of colonial luminaries back across the Atlantic to discover what has befallen the Old World. With them sails Red Shoes, a Choctaw shaman whose mysterious connections to the invisible world warn him that they are all moving toward a confrontation as violent as it is decisive . . . Read Less

Goodreads reviews for A Calculus of Angels (The Age of Unreason, Book 2)

Godzilla: King of the Monsters - The Official Movie Noveliza...

The Elder Scrolls: The Infernal City