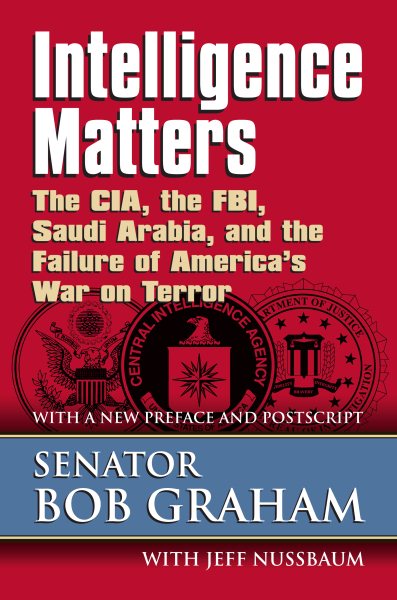 A compelling account and analysis of the failures that led to the infamous September 11 attacks, as recalled by the co-chair of the Joint House-Senate inquiry that conducted the ensuing investigation. Raises fundamental questions about the competence and honesty of public officials in the CIA, the FBI, and the White House. Read More
Shining much-needed light on areas the 9/11 Commission preferred to keep dark, Intelligence Matters chronicles the efforts of a historic joint House-Senate inquiry to get to the bottom of our intelligence failures on that infamous day in 2001. Originally published in 2004 amid the media circus surrounding The 9/11 Commission Report, it told more than a riveting tale&apos;it also provided an unflinching expos of failure, incompetence, and deceit at the highest levels of our government.The Joint Inquiry, co-chaired by Senator Bob Graham (D-Florida), was the first and arguably most effective government body to investigate the horrendous 2001 attacks. Indeed, it helped compel a reluctant George W. Bush to establish the 9/11 Commission. But while both investigations sharply criticized the failures of our nation's intelligence establishment, only Graham's dared to challenge the Bush administration on a number of troubling points-especially the apparent complicity of Saudi officials in the events of 9/11, the subsequent protection provided by President Bush for a large number of Saudis (including members of the bin Laden family), and the run-up to the Iraq War, which Graham voted against. The original work combined a compelling narrative of 9/11 with an insightful eyewitness chronicle of the Joint Inquiry's investigation, conclusions, and recommendations. Sharply critiquing the failures at the CIA, FBI, and the White House and detailing at least twelve occasions when the 9/11 plot could have been stopped, it concluded with a clear plan for overhauling our intelligence and national security establishment. For this paperback edition, Graham has added a substantial new preface and postscript that lucidly examine how effectively the nation has responded&apos;or failed to respond&apos;to the Joint Inquiry's recommendations. This edition restores Intelligence Matters to its rightful place as one of the key texts on the subject of 9/11 and provides a grim reminder of the challenges that remain for us in the war on terror. Read Less

Goodreads reviews for Intelligence Matters: The CIA, the FBI, Saudi Arabia, and the Failure of America's War on Terror

Let's Get a Pup! Said Kate