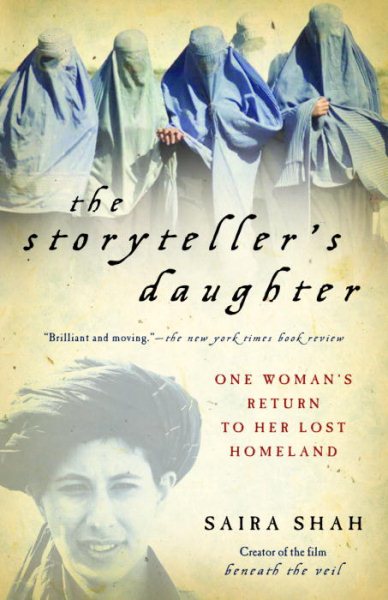 The woman who filmed Beneath the Veil, a groundbreaking documentary about Afghanistan, her family's homeland, shares her journey of self-discovery as a woman caught between Western and Afghan worlds. Reader's Guide available. Reprint. 25,000 first printing. Read More
Imagine that a jewel-like garden overlooking Kabul is your ancestral home. Imagine a kitchen made fragrant with saffron strands and cardamom pods simmering in an authentic pilau. Now remember that you were born in London, your family in exile, and that you have never seen Afghanistan in peacetime.These are but the starting points of Saira Shah’s memoir, by turns inevitably exotic and unavoidably heartbreaking, in which she explores her family’s history in and out of Afghanistan. As an accomplished journalist and documentarian–her film Beneath the Veil unflinchingly depicted for CNN viewers the humiliations forced on women under Taliban rule–Shah returned to her family’s homeland cloaked in the burqa to witness the pungent and shocking realities of Afghan life. As the daughter of the Sufi fabulist Idries Shah, primed by a lifetime of listening to her father’s stories, she eagerly sought out, from the mouths of Afghan refugees in Pakistan, the rich and living myths that still sustain this battered culture of warriors. And she discovered that in Afghanistan all the storytellers have been men–until now. Read Less

Goodreads reviews for The Storyteller's Daughter: One Woman's Return to Her Lost Homeland

Last of the Mohicans