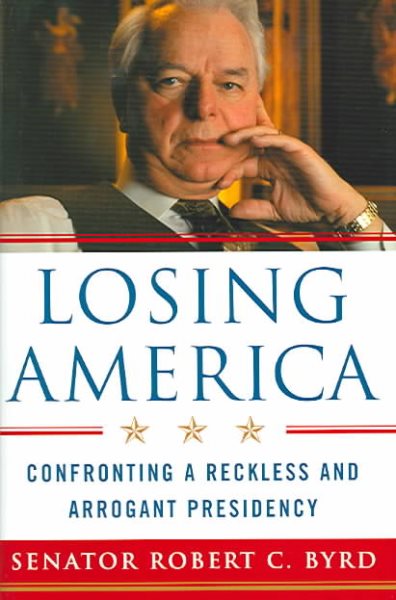 A fifty-year veteran of Congress presents a cautionary argument against Bush administration practices that disrupt the balance of governmental power, limit public participation in decision-making, and compromise privacy. Read More
In the months and years following September 11, Senator Robert C. Byrd viewed with dismay what he considers a "slow unraveling of the people's liberties," a time when dissenting voices were stilled and awesome power swung suddenly to the president to fight a "war on terror."The way down this path violates historic American principles. It provides no regard for the balance of powers or the role of the Congress; it invades our privacy; it makes no attempt to educate the public and build consensus. It displays little regard for the environment. It grapples little with the realities of people who have to work for a living, rear children or care for aging parents, and cope with physical ailments - problems that plague our country and cry out for attention. Swept along, we have entered a war under a new and dangerous doctrine without proper consideration, and we have rushed dangerous legislation through Congress willy-nilly. We have a White House that favors the rich and the well-connected, lavishes tax cuts on big businesses, and pushes through unfair tax legislation.Most serious, this administration has, in greater measure than ever before, operated under a cloak of secrecy, which is deeply antithetical to the principles of our nation.For far too long, argues Senator Byrd, too many of us have passively gone along, aiding and abetting a dangerous process. Now is the time, he urges, to regain the Constitution that our forefathers so wisely left us, a time to return to the values and processes that made America great. Read Less