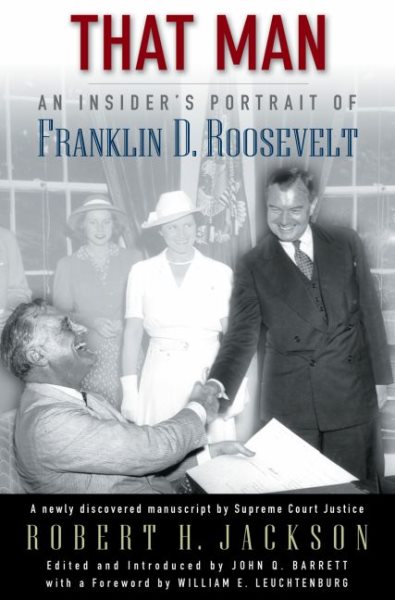 Unpublished for fifty years, a memoir by a former Attorney General, Supreme Court Justice, and close friend of Franklin Roosevelt, provides an intimate portrait of FDR and the events of his administrations. Read More
Robert H. Jackson was one of the giants of the Roosevelt era: an Attorney General, a still revered Supreme Court Justice and, not least important, one of Franklin Delano Roosevelt's close friends and advisers. His intimate memoir of FDR, written in the early 1950s before Jackson's untimely death, has remained unpublished for fifty years. Here is that newly discovered memoir. Written with skill and grace, this is truly a unique account of the personality, conduct, greatness of character, and common humanity of "that man in the White House," as outraged conservatives called FDR. Jackson simply but eloquently provides an insider's view of Roosevelt's presidency, including such crucial events as FDR's Court-packing plan, his battles with corporate America, his decision to seek a third term, and his bold move to aid Britain in 1940 with American destroyers. He also offers an intimate personal portrait of Roosevelt--on fishing trips, in late-night poker games, or approving legislation while eating breakfast in bed, where he routinely began his workday. We meet a president who is far-sighted but nimble in attacking the problems at hand; principled but flexible; charismatic and popular but unafraid to pick fights, take stands, and when necessary, make enemies. That Man is not simply a valuable historical document, but an engaging and insightful look at one of the most remarkable men in American history. In reading this memoir, we gain not only a new appreciation for Roosevelt, but also admiration for Jackson, who emerges as both a public servant of great integrity and skill and a wry, shrewd, and fair-minded observer of politics at the highest level. Read Less

Goodreads reviews for That Man: An Insider's Portrait of Franklin D. Roosevelt

That Man: An Insider's Portrait of Franklin D. Roosevelt