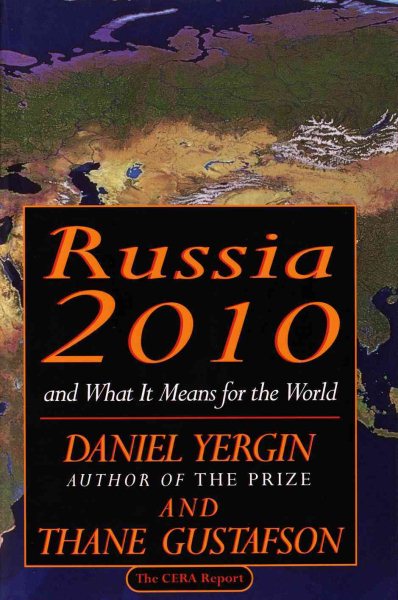 Examines four possible scenarios for the future of Russia, looks at the internal forces shaping the new Russia, and discusses Russia's future influence on the West Read More
What will Russia be like in the year 2010? What impact will the future of Russia have on the West? And what could we do now to help shape a better future?In this brilliant and illuminating book, Daniel Yergin, the Pulitzer Prize-winning author of The Prize, and Thane Gustafson, leading expert on Russian politics and economics, present four "histories" of the future for Russia and offer a vision of "capitalism Russian style."The collapse of the Soviet Union and communism is the most important event at the end of the twentieth century. But what comes next? Using the unique technique of "scenario planning," Yergin and Gustafson explore what the "new Russian revolution" will bring. Which scenario will it be? Will it be The Two-Headed Eagle, a Russia that looks forward and backward at the same time; The Long Good-bye, the dissolution of Russia; or the Russian Bear, a grim dictatorship, anti-West and turned in on itself? Or will it be Chudo, the Russian economic miracle? The authors analyze the consequences of each scenario for the United States and other countries, pointing to possible surprises. Yergin and Gustafson provide essential insight into emerging power relationships, local wars that could turn into larger conflicts, the time bombs of ethnic strife that sit on Russia's borders - and the economic and political opportunities facing us in the future.Russia 2010 grew out of a confidential study developed for a select group of international companies by Cambridge Energy Research Associates (CERA), a leading international consulting firm. Yergin and Gustafson focus on Russia's enormously difficult triple transition - from dictatorship to democracy, from communism to a market economy, and from empire to nation state. The authors envision the struggles ahead, as excommunists, scions of the security state, and defense industrialists vie with democrats and the new entrepreneurs for their share of Russia's future.Russia 2010 provides a framework for understanding the revolution in Russia. Yergin and Gustafson analyze the role of foreign investment and international aid, the priorities for arms control, and the fault lines that could shake relations between the United States and Russia.Fascinating and authoritative, Russia 2010 will shape debates about the future and is the book that Americans need to read to make sense of events. Read Less

Goodreads reviews for Russia 2010: and What It Means for the World

The Prize: The Epic Quest for Oil, Money & Power

The Prize: The Epic Quest for Oil, Money and Power

The Quest: Energy, Security, and the Remaking of the Modern...