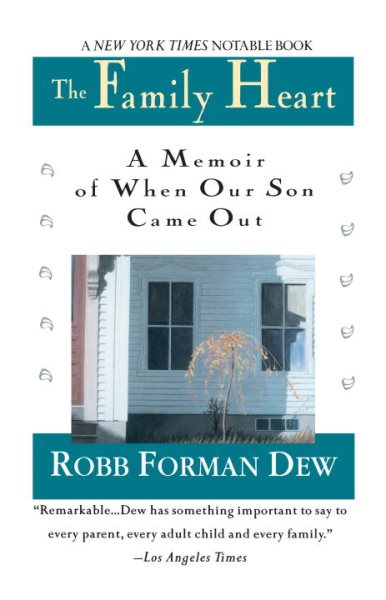 The author depicts the depth of family love in this recounting of the time when her son told her that he was gay and the events that followed. Read More
"ASTONISHINGLY MOVING...The Family Heart is a tough and challenging work, for it reminds us that empathy is a humble but radical virtue, if lived."--USA Today" I'm gay.' Every day, parents around the world hear those words from their children. Most are utterly unprepared for them. By writing The Family Heart, Robb Forman Dew has done such parents an extraordinary service."--The Washington Post Book World"TOUCHINGLY WRITTEN."--The Boston Globe"At the heart of this memoir lies a true epiphany: the author's sudden, galvanizing awareness of the suicidal consequences of homophobia. It is a chilling moment, and it is described with a writer's eloquence and a mother's rage....Dew's intense imagination, combined with her ignorance of homosexuality, was as much a hindrance as a help, and it is to her credit that she has recorded the occasionally wacky assumptions and painful readjustments of her own odyssey with such care and humor."--The New Yorker"POETIC, HONEST."--Fort Worth Star-Telegram"Eloquent and absorbing...The true testament of Mrs. Dew and her husband as parents, and the most powerful moments of this inspiring memoir, occur when they come out' to their community as parents of a gay child....Though Mrs. Dew imparts a lot of self-gained wisdom in this perceptive and beautifully articulated story, in the end she realizes she has something she has always had--a strong loving family and two good sons."--The Dallas Morning News"AMEN FROM ANY MOTHER, EVERY MOTHER."--Anna Quindlen The New York Times Read Less

Goodreads reviews for The Family Heart: A Memoir of When Our Son Came Out