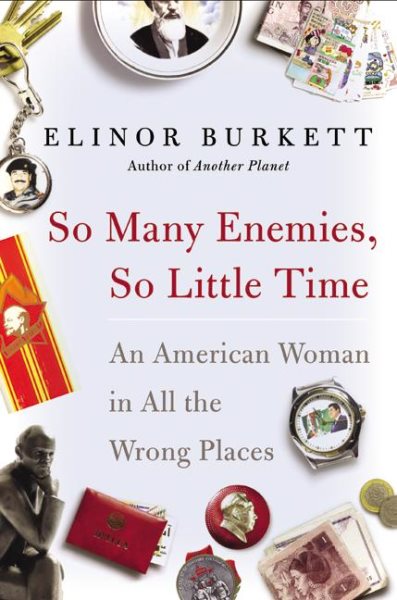 A political travelogue of the journalist author's experiences in the middle east follows her acceptance of a Fulbright Professorship in Kyrgyzstan, a decision that led to numerous adventures with local people in such areas as Kabul, Baghdad, and Iran. 25,000 first printing. Read More
At a time when Americans are so riveted by questions about their place in a newly hostile world that they are swearing off air travel, Elinor Burkett does not just take a trip; she takes a headlong dive into enemy territories, crisscrossing back and forth between Ronald Reagan's old Evil Empire and George Bush's new Axis of Evil.Her adventure begins with her assignment as a Fulbright Professor teaching journalism in Kyrgyzstan, a faded fragment of Soviet might in the heart of Central Asia -- a place of dilapidated apartments, bizarre food and demoralized citizens clinging to the safety of Brother Russia. But when she refuses to join the other expatriates evacuated from the "-stans," it turns into much more. She flies into Afghanistan just as the Taliban are departing, mingles with tense Iraquis watching the gathering storm clouds of an American-led invasion and becomes the target of the resentments of the old comrades of the former Soviet Union. Journeying between Iran and Mongolia, Uzbekistan, China and Vietnam, she confronts old enemies in an era of terrifying new ones.When she left home, Burkett, a seasoned journalist, wasn't gathering material for a book; she thought she was "taking a vacation from reality." But she emerges with a dazzling political travelogue that will make even the most enlightened reader question what he or she has considered as truth. Whether she's writing about being served goat's head in a Kyrgyz yurt, checking out bowling alleys in Baghdad, avoiding mullahs zooming along on motorbikes in Tehran or simply trying to cook a chicken in her own crumbling apartment, Burkett offers an eclectic series of adventures that are alternately comical, whimsical, poignant and discomfiting. Read Less

Goodreads reviews for So Many Enemies, So Little Time: An American Woman in All the Wrong Places

Another Planet: A Year in the Life of a Suburban High School

So Many Enemies, So Little Time: An American Woman in All th...