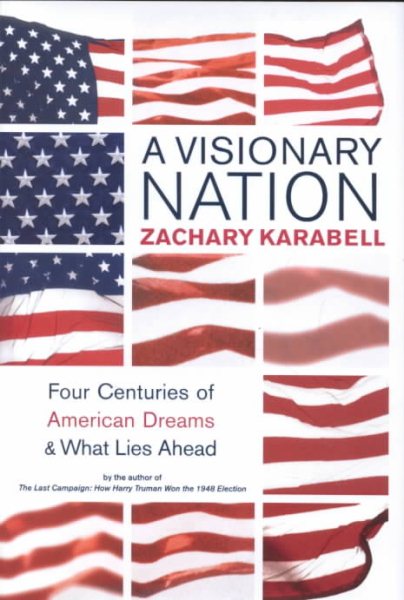 An anecdotal history of the American experience explores the historical events, goals, movements, and factors that have shaped American culture and speculates on how the future will revolutionize American life. Read More
America is a nation based on an idea. For nearly four centuries, Americans have shared the conviction that a perfect world is within reach. Running through our history is the presumption that we can have it all.In A Visionary Nation, Zachary Karabell shows how this utopian impulse forms a continuous thread in the tapestry of the American experience and represents who we really are. In this penetrating volume, he brings the core of American history to life by examining its successive stages, each promising utopia and none delivering it. Karabell reveals that during every stage, there have been men and women who strove to transform the world. These are the visionaries who have defined American culture. Part history, part essay, part prediction, this profoundly original work tells the stories of visionaries past and present, from Anne Hutchinson to FDR, Alexander Hamilton to Bill Gates. It shows that if our history has proven one thing, it is that no era lasts forever. In striving for the ideal, we have achieved much, but never have realized our dreams of spiritual fulfillment and material prosperity. And so we are chronically plagued by disappointment that we have not achieved everything.Along with this distinctive view of American history, Karabell offers his own vision of where our nation is heading. Just as the Puritan vision of a City on a Hill was supplanted by the Founding Fathers' vision of individuality, and just as the expansive vision of a government-led Great Society was eclipsed by the New Economy in the 1990s, so too will the New Economy be replaced in our near future by a period when community and spirituality will occupy center stage. Provocative, intelligent, and deeply engaging, A Visionary Nation provides a framework for understanding America's past while preparing us for the next phase of the nation's growth. Read Less

Goodreads reviews for A Visionary Nation: Four Centuries of American Dreams and What Lies Ahead

Superfusion: How China and America Became One Economy and Wh...

Peace Be Upon You: Fourteen Centuries of Muslim, Christian,...

Kennedy, Johnson, and the Quest for Justice: The Civil Right...