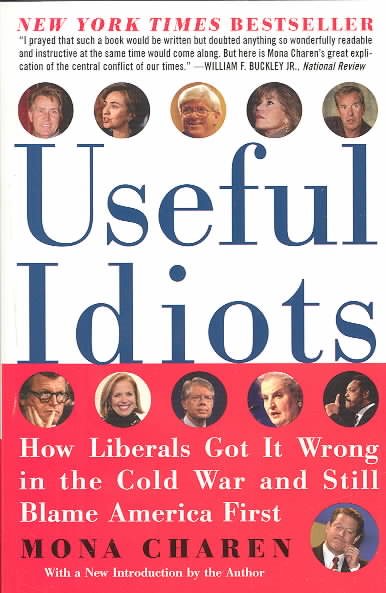 The author attacks American liberals as naive and disingenuous in their dealings with the world, accusing them of rewriting history to portray themselves as "Cold Warriors" along with conservatives. Read More
Meet the "Useful Idiots" Al Gore, Ted Kennedy, Jimmy Carter, Jesse Jackson, Madeleine Albright, Katie Couric, Jane Fonda, Martin Sheen, and all the other liberals who were -- and are -- always willing to blame America first and defend its enemies as simply "misunderstood." Now that the Cold War has been won, these liberals, amazingly, are proud to claim credit for the victory -- conveniently forgetting their apologies for the Communists and their spluttering attacks on Cold Warriors like Ronald Reagan.But nationally syndicated columnist Mona Charen isn't about to let them rewrite history. From politicians and professors to entertainers and journalists, she exposes the useful idiots for all the world to see in this arresting New York Times bestseller. Read Less

Goodreads reviews for Useful Idiots: How Liberals Got It Wrong in the Cold War and Still Blame America First

Useful Idiots: How Liberals Got It Wrong in the Cold War and...

Do-Gooders: How Liberals Hurt Those They Claim to Help (and...