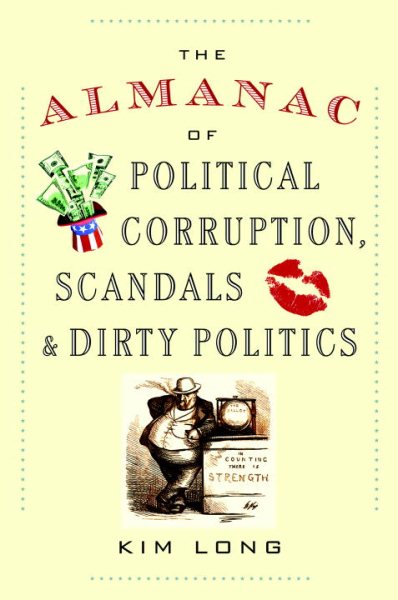 Describes notable instances of political corruption and malfeasance in the United States from the colonial era to 2006, and includes a list of corruption benchmarks and censure histories of the U.S. House and Senate. Read More
Watergate. Billygate. Iran-Contra. Teapot Dome. Monica Lewinsky.American history is marked by era-defining misdeeds, indiscretions, and the kind of tabloid-ready scandals that politicians seem to do better than anyone else. Now, for the first time, one volume brings together 300 years of political wrongdoing in an illustrated history of politicians gone wild—proving that today’s scoundrels aren’t the first, worst, and surely won’t be the last….From high crimes to misdemeanors to moments of licentiousness and larceny, this unique compendium captures in complete, colorful detail the foibles, failings, peccadilloes, dirty tricks, and astounding blunders committed by politicians behaving badly. Amid stories of brawlers, plagiarists, sexual predators, tax evaders, and the temporarily insane, this almanac tells all about:•The only (so far!) president to be arrested while in office: Ulysses S. Grant, who was allegedly issued a ticket for racing his horse and buggy through the streets of Washington, D.C. •The former New Jersey state senator David J. Friedland, who disappeared during a scuba diving accident in 1985. It turns out he staged the accident and served nine years in prison after being captured in the Maldives. •Tape-recorded instructions from highbrow president Franklin Delano Roosevelt on how his staff should carry out some low-down political tricks•The bizarre story of U.S. congressman Robert Potter, who castrated two men he suspected of having affairs with his wife. Potter won election to the state house while in jail—but was kicked out for cheating at cards.•Texas congressman Henry Barbosa Gonzalez: he was charged with assault in 1986 after he shoved and hit a man who called him a communist. Gonzalez was seventy years old at the time. At once shocking and hilariously funny, here’s a book that exposes the history of American politics, warts and all—and makes for hours of jaw-dropping, fascinating, illuminating reading. Read Less

Writing In Bullets: The New Rules for Maximum Business Commu...

Moon Book: The Meaning of Methodical Movements of the Magnif...

The Best From Yank the Army Weekly

By Editors of Yank