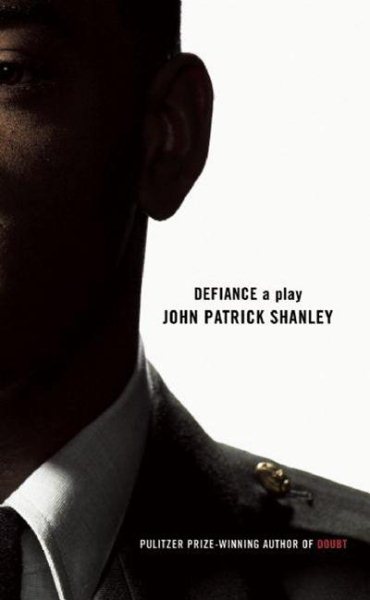 John Patrick Shanley's follow-up to his Pulitzer Prize-winning Doubt. Read More
“Defiance is a necessary step in the life of an individual and in the life of a nation.”—John Patrick Shanley“As thoughtful and probing as its predecessor, Defiance [is] filled with the provocative questions and bristling dialogue for which Mr. Shanley is known . . . as it wonders about its big, knotty subjects.”—Ben Brantley, The New York Times Defiance is the “very rich and satisfying” (The Village Voice) second work in John Patrick Shanley’s trilogy that began with Doubt. The play is set in 1971 at Camp Lejeune, North Carolina, where Lt. Col. Morgan Littlefield and his reluctant protégé Capt. Lee King—a young African American officer—clash over issues of race and authority within the Marine Corps, even as the civil rights movement and Vietnam War divide the world outside. In this high-stakes struggle at the top of the ranks, witnessed by the base’s inquisitive Chaplain White and Littlefield’s irreproachable wife Margaret, Shanley has crafted another timely play exploring issues of power and morality within a hallowed institution. John Patrick Shanley’s Doubt won the 2005 Pulitzer Prize for Drama and the Tony Award for Best Play, and was chosen as best play of the year by over ten news-papers and magazines. His other plays include Danny and the Deep Blue Sea, Four Dogs and a Bone, Psychopathia Sexualis, and Savage Limbo. He has written extensively for TV and film, including Moonstruck, for which he won an Academy Award for best screenplay. Read Less

The dreamer examines his pillow