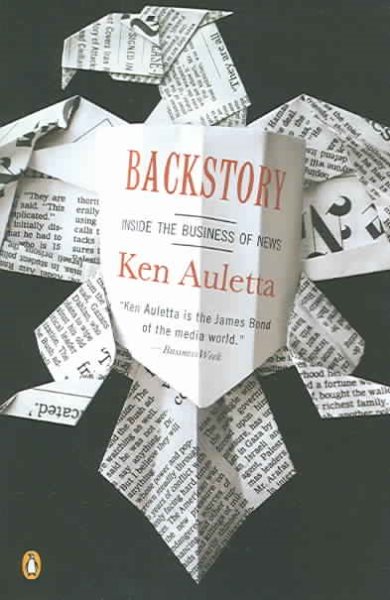 An insider's journey inside the world of journalism offers a perceptive glimpse at its most important institutions and individuals in a collection of essays, profiles, and articles that addresses the struggle between ideals and the business of news, the moral ambiguity of the "media personality" phenomenon, media consolidation, the impact of the Internet, and other key topics. Reprint. Read More
It is said that journalism is a vital public service as well as a business, but more and more it is also said that big media consolidation; noisy, instant opinions on cable and the Internet; and political “bias” are making a mockery of such high-minded ideals. In Backstory, Ken Auletta explores why one of America’s most important industries is also among its most troubled. He travels from the proud New York Times, the last outpost of old-school family ownership, whose own personnel problems make headline news, into the depths of New York City’s brutal tabloid wars and out across the country to journalism’s new wave, chains like the Chicago Tribune’s, where “synergy” is ever more a mantra. He probes the moral ambiguity of “media personalities”—journalists who become celebrities themselves, padding their incomes by schmoozing with Imus and rounding the lucrative corporate lecture circuit. He reckons with the legacy of journalism’s past and the different prospects for its future, from fallen stars of new media such as Inside.com to the rising star of cable news, Roger Ailes’s Fox News. The product of more than ten years covering the news media for The New Yorker, Backstory is Journalism 101 by the course’s master teacher. Read Less

Goodreads reviews for Backstory: Inside the Business of News

Googled: The End of the World As We Know It

Frenemies: The Epic Disruption of the Ad Business (and Every...

Greed and Glory on Wall Street: The Fall of the House of Leh...