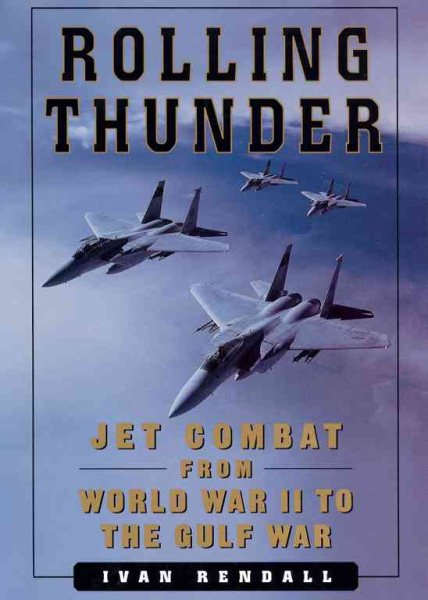 Chronicles the evolution of modern aerial warfare, from World War II, through the Cold War, to the Middle East Gulf crisis, and decribes the development of the quintessential fighter pilot Read More
"The jet fighter is one of the great icons of the second half of the twentieth century, a symbol of achievement, of technical excellence, of ultimate modernity, of latent military power." So begins Ivan Rendall, a former Royal Air Force pilot, in this thrilling first-ever history of the most seductive and deadly of all of man's weapons of war. From its birth in battle during the last days of World War II to its current aeronautical peak, the jet fighter has always been the king of the sky. Rendall's Rolling Thunder is the celebration of a machine, and a culture, for which "winning is about accepting that there is no such thing as second-best." Rendall's scrupulous history is driven by a strong thesis: jets may depend upon technological advances, but the human edge supplied by their pilots has determined their success or failure in all times and places. In this respect, the West has triumphed over its enemies. Beginning with the dangerously fast but hopelessly outnumbered German Me 262, jets and the men who flew them quickly became potent physical and psychological weapons. From the ruins of a defeated Germany came the now-familiar look of swept-back wings and with them the secret of supersonic flight. Less than a decade later, the two World War II allies most responsible for Germany's defeat would meet as enemies in Korea. Their planes -- the American F-86 Saber and Russian MiG-15 -- clashed over the Yalu River in what American pilots called "MiG Alley." Diving from 40,000 feet and flying through dry riverbeds so low that their engines kicked up dirt, both sides' machines soon proved their worth. In Vietnam, American fighter pilots involved in the costly "Rolling Thunder" campaign again proved the value of the American emphasis on individualism as taught in the "Top Gun" school of aeronautics. Rendall vividly describes pilots in F-4 Phantoms and F-105 Thunderchiefs dodging SA-2 surface-to-air missiles in the "ultimate test of man versus machine." Recent uses of air power, from the legendary "Instant Thunder" campaign in the Gulf War to the enforcement of No-Fly Zones in Bosnia, have proved that the jet fighter remains as versatile and dangerous as ever. But today, with $100 million mach 3 machines capable of climbing 65,000 feet -- twice the height of Everest -- in a minute, many have argued that the pilot has become the weak link in the jet fighter's lethal equation. Rendall shows that the argument to remove the pilot from his machine -- seemingly complete with NASA's new unmanned X-36 -- is as old as the machine that broke the sound barrier, Chuck Yeager's X-1. The ability to balance the grace and brutality of a machine that has evolved into a perfect combination of form and function will remain the unique province of the fighter pilot -- the "quintessential warrior of our times." Read Less

Reaching for the Skies

By Jacobus, Leo A