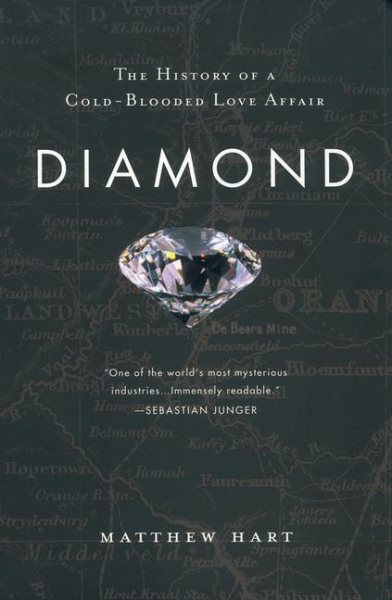 On a hot morning in May 1999, three garimpeiros (small-scale miners) found a large pink diamond in the muddy waters of the Abaete River in Brazil, a discovery that captivated the entire diamond trade. Beginning with this dramatic and revealing tale, Matthew Hart embarks on a journey into an obsessive, largely hidden, and utterly fascinating world. Read More
For centuries, diamonds have symbolized wealth, prestige and love; however, behind those symbols lies a world of deceit, monopoly and war. Hart follows the diamond trail around the globe, from the basement room where Gabi Tolkowsky, the world's greatest diamond cutter, faced the 599-carat Centenary diamond, to the fogbound smugglers' paradise of Africa's Diamond Coast. He records the heroic struggle of the 24-year old woman who discovered a multibillion dollar diamond mine on the Arctic Circle and describes the company that feared her most, masterminds of the great and shadowy diamond cartel. Combining history, science, business, and adventure, Diamond captures the essence of this priceless gem and the world that surrounds it. Read Less

Goodreads reviews for Diamond: The History of a Cold-Blooded Love Affair

Gold: The Race for the World's Most Seductive Metal

Diamond: A Journey to the Heart of an Obsession