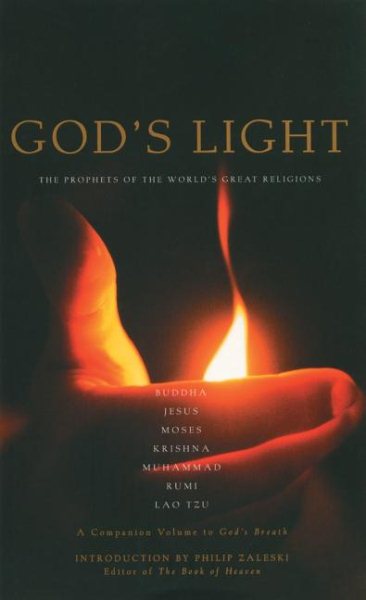 Provides concise biographical sketches by key writers and religious leaders of many of the world's most revered religious figures, including the Buddha, Jesus, and Muhammad, in a volume that features the writings of such contributors as Elie Wiesel, Zora Neale Hurston, and Mother Teresa. Original. Read More
God’s Breath: Sacred Scripture of the World assembled essential texts from seven sacred wisdom traditions of the world—Buddhism, Christianity, Judaism, Hinduism, Islam, Sufism, and Taoism. Now God’s Light presents the compelling life stories of the key figures from these religious traditions: the Buddha, Jesus, Moses, Arjuna, Muhammad, Rumi, and Lao Tzu. Each figure is represented by a main profile as well as a briefer preface. Among the notable contributors are Elie Wiesel and Zora Neale Hurston on Moses, Coleman Barks and Thomas Merton on Rumi, Marcus Borg and Mother Teresa on Jesus, and Thich Nhat Hanh and Peter Matthiessen on the Buddha. Each contribution is preceded by an elegant woodcut of the religious figure—and the volume shares with its predecessor a beautifully crafted volume, ideally priced and produced, that is the perfect companion for every home. Read Less

Goodreads reviews for God's Light: The Prophets of the World's Great Religions -- A Companion to God's Breath

God's Breath: Sacred Scriptures of the World -- The Essentia...

Legends: Women Who Have Changed the World Through the Eyes o...

Where Inspiration Lives: Writers, Artists, and Their Creativ...