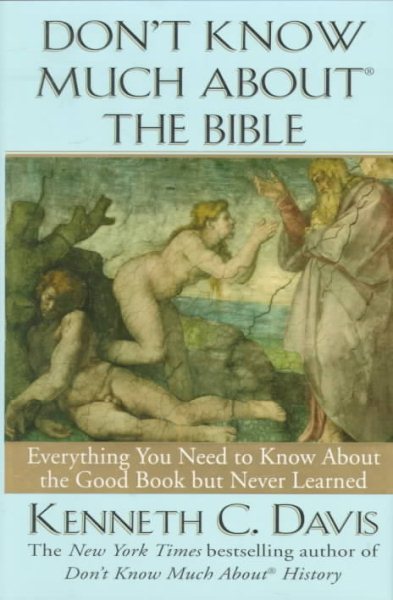 Explores the truths and myths of the Bible through clear retellings of popular stories from the Old and New Testaments and a review of the historical events happening at that time Read More
Nine out of ten Americans own a Bible, but how much do they know about the one book that has influenced human history more than any other? Don't Know Much About the Bible by New York Times bestselling author Kenneth C. Davis is designed to illuminate everything we need to know about the Good Book but never learned.With wit, authority, and intelligence, Davis brings the world of the Old and New Testaments to vivid life, setting the panorama of the Scriptures against the historical events that shaped them; clearing up misconceptions and mistranslations; summarizing Bible stories, parables, and miracles; and adding fresh new insights to the world's most owned, least understood book.Davis is uniquely qualified for the assignment. The creator of the bestselling Don't Know Much About series, which has more than 1.6 million copies in print, he now illuminates the bestselling book of all time using his inimitable question-and-answer approach and providing a key to the people, places, and "household names" we need to unlock "The Greatest Story Ever Told."Relying on up-to-date research and improved translations, Davis set out to uncover what the Bible says -- and doesn't say. Don't Know Much About the Bible is the result of his efforts and includes the following observations: There are two different Creation stories told in Genesis, but no apple in the Garden of Eden story. Noah invented wine and cursed the son who had seen him drunk and naked. There was no "coat of many colors" in the story of Joseph and his jealous brothers, but rather a long-sleeved robe. Moses didn't write the Torah and he didn't part the Red Sea in his escape from Pharaoh. The Sixth Commandment does not condemn all killing. Jericho's walls may have tumbled down because the city lies on a fault line. King David probably didn't kill Goliath and didn't write the Psalms. Read Less

Goodreads reviews for Don't Know Much About the Bible: Everything You Need to Know About the Good Book but Never Learned

Don't Know Much about Space

Don't Know Much About the Civil War

Don't Know Much About® Mythology: Everything You Need to Kno...