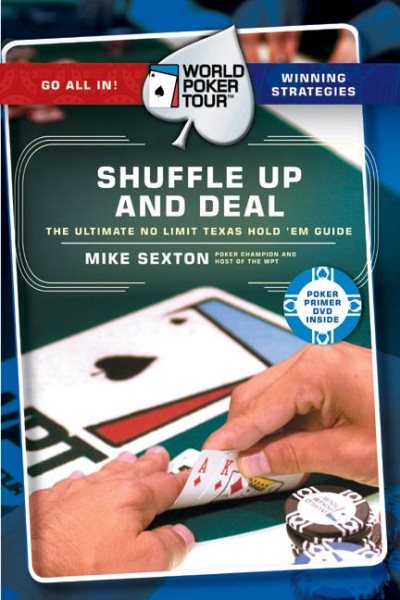 Presents a look at the television program, "World Poker Tour," describing the fourteen prestigious, high-stakes poker tournaments filmed on location around the world, with insider tips on how to become proficient at the game. Read More
A poker primer from the hosts and stars of the World Poker Tour, offering basic strategy, trivia, and an inside look at this runaway hit. The World Poker Tour has revolutionized the game of poker by putting cameras under the table and raising awareness and enthusiasm to an international level. The World Poker Tour: Shuffle Up and Deal is aimed at the millions of passionate fans of the WPT, whether they're ambitious up–and–comers on the poker circuit, or casual players hoping to take the pot at their next Wednesday night game. Shuffle Up and Deal will be a solid poker primer, covering set–up, play, and basic poker strategy, along with many of the interactive elements of the WPT TV show: poker trivia, definitions of poker terms using examples from the show, profiles of WPT star players, insights into the world of professional poker, and an inside look at the show. Read Less

Unto the least of these

The PreHistory of The Far Side: A 10th Anniversary Exhibit (...

The Man Who Saw Through Time (The Scribner Library, Lyceum E...