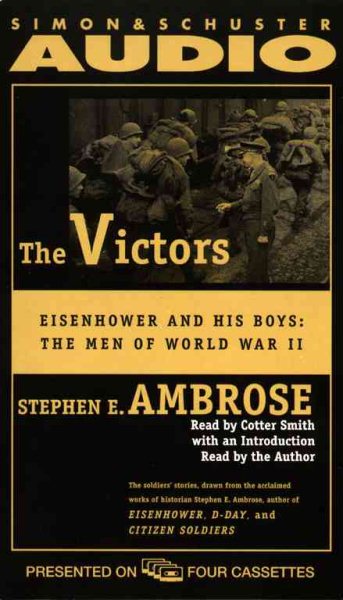 A study of World War II journeys from the decision to cross the English Channel on D-Day, through the horrific battles that followed, to the long and difficult drive to Germany, in a celebration of the experiences of Eisenhower's "citizen soldiers." Read More
From America's preeminent military historian, Stephen E. Ambrose, comes a brilliant telling of the war in Europe, from D-Day, June 6, 1944, to the end, eleven months later, on May 7, 1945. This authoritative narrative account is drawn by the author himself from his five acclaimed works about that conflict, most particularly from the definitive and comprehensive D-Day and Citizen Soldiers. But it is, as always with Stephen Ambrose, the ranks, the ordinary boys and men, who command his attention and his awe. The Victors tells their stories, how citizens became soldiers in the best army in the world. Ambrose draws on thousands of interviews and oral histories from government and private archives, from the high command -- Eisenhower, Bradley, Patton -- on down through officers and enlisted men, to re-create the last year of the Second World War when the Allied soldiers pushed the Germans out of France, chased them across Germany, and destroyed the Nazi regime. Read Less

Goodreads reviews for The VICTORS, THE: Eisenhower and His Boys: The Men of World War II