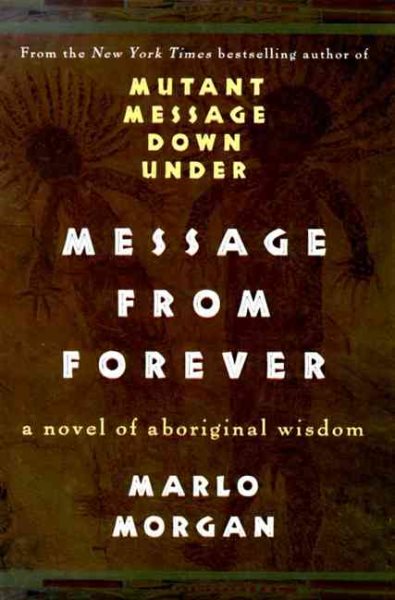 Offers a parable of self-enlightenment involving two aboriginal twins and their worldwide search for their roots Read More
Following her modern classic and worldwide bestseller Mutant Message Down Under, Marlo Morgan&#39;s long-awaited new novel is a tale of self-enlightenment about aboriginal twins separated at birth and the search for roots that reunites them form opposite sides of the globe.Once more Morgan unveils the inspiring aboriginal worldview while pointedly exposing the plight of an ancient race rapidly becoming extinct as a result of more than two hundred years of systematic discrimination.Message from Forever follows the lives of Australian aboriginal twins who were taken form their young mother by Christian missionaries. The baby boy is sent to a huge sheep ranch, where he grows up with little adult supervision and random affection. On his own, Geoff develops his talent as an artist, producing work at a level well beyond his five years. The boy is adopted by an American minister and is raised in New England with little sense of who he is or of his cultural heritage. His sister is given only the first name Beatrice by the nuns at an Australian orphanage, where she encounters continual racism and experiences shattering looses for the first eighteen years of her life. Upon reaching adulthood, Beatrice leaves the orphanage to work at a boardinghouse. Beatrice hungers to know more about her ancestral roots. She walks away from her life in the city to strike out into the northern desert nation, where she goes on a walkabout with a small band of Aborigines. Geoff does not fare so well in America. As a teen, he runs away from home and slips into a life of crime, alcohol, and alienation. His addictions destroy him, and he finds himself on Death Row with little sense of how he got there. After decades of learning about people in the Outback, Beatrice leaves her nomadic life to become a "runner between both worlds." She returns to the Mutant world as a political activist fighting for aboriginal rights of citizens arrested and convicted of crimes in foreign countries, as well as a champion of the rights of adults who were taken from their native culture as children. Her life&#39;s work bring her into contact with her lost brother, though neither is aware of their relationship. Beatrice gives Geoff the "message from forever," which outlines aboriginal philosophy and principles of good living, along with an offer to return to Australia. As we read the message with Geoff, we are challenged to stretch our concepts of identity, spirituality, and openness transcends injustice and degradation, directing us to live our lives in accordance with ageless values and simple wisdom. Read Less

Goodreads reviews for Message from Forever: A Novel of Aboriginal Wisdom

Mutant Message from Forever : A Novel of Aboriginal Wisdom

Mutant Message Down Under