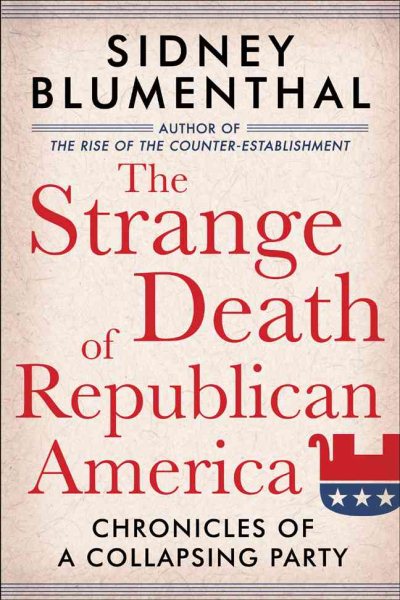 Sidney Blumenthal?trenchant analyst, best-selling author, and senior adviser to former Presiden... Read More
Sidney Blumenthal?trenchant analyst, best-selling author, and senior adviser to former President Bill Clinton (and more recently, Hillary)?offers a penetrating journalistic and historical examination of the ongoing collapse of Republicanism. Closely charting the Party’s imploding reputation in America and the world, as well as the potential consequences of George W. Bush’s radical presidency for the 2008 election, The Strange Death of Republican America will be required reading for anyone interested in politics and concerned about the fate of the nation. In these essays and opinion columns written by Blumenthal over the past few years for The Guardian of London and salon.com, along with a new and stimulating introduction, Blumenthal provides a unifying and overarching perspective on the Bush years.Blumenthal scrutinizes the past and present state of the Republican Party, which he believes portends the incipient demise of their vaunted political machine and the Republican era since the Nixon administration. The issues on the table range from the legacy of Nixon’s imperial presidency and its influence on Dick Cheney to Karl Rove’s failed strategy for political realignment, as well as conflicts within the military and intelligence communities over Bush’s policies, and the underlying political shifts that are demonstrably weakening the once-strong foundations of Republican philosophy and governance.These essays have the cumulative effect of an irresistible factual and historical tide?a portrait of a party in self-destructive decline that will grab the attention of anyone fascinated by the world of politics. A selection of the Progressive Book Club. Read Less

Goodreads reviews for The Strange Death of Republican America: Chronicles of a Collapsing Party

The Rise Of The Counter-Establishment

How Bush Rules: Chronicles of a Radical Regime