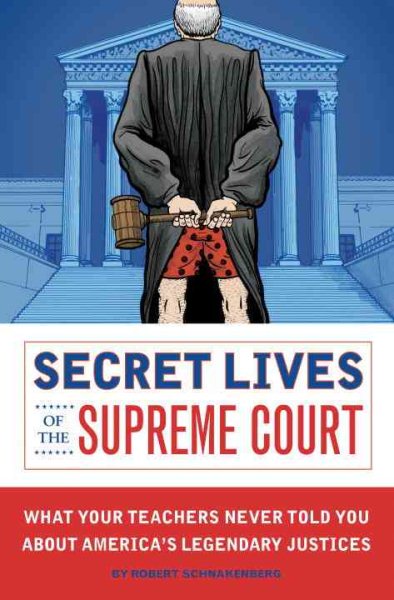 Presents little-known facts and trivia about the United States Justices of the Supreme Court, from John Jay to Samuel Alito, including information on personal lives, character traits, and unusual cases. Read More
Drugs, Adultery, Bribery, Homosexuality, corruption—and the Supreme Court?!?   Your high school history teachers never gave you a book like this one! Secret Lives of the Supreme Court features outrageous and uncensored profiles of America’s most legendary justices—complete with hundreds of little-known, politically incorrect, and downright wacko facts. You’ll discover that:       •  Hugo Black was a member of the Ku Klux Klan.     •  Benjamin Cardozo likely died a virgin.     •  John Rutledge attempted suicide by jumping off a bridge.     •  John Marshall Harlan organized regular screenings of X-rated films.     •  Thurgood Marshall never missed an episode of Days of Our Lives.     •  Sandra Day O’Connor established the court’s first Jazzercise class.     •  And much, much more!   With chapters on everyone from John Jay to Samuel Alito, Secret Lives of the Supreme Court tackles all the tough questions that other history books are afraid to ask: How many of these judges took bribes? How many were gay? And how could so many sink into dementia while serving on the highest court in the land? American history was never this much fun in school! Read Less

Goodreads reviews for Secret Lives of the Supreme Court: What Your Teachers Never Told You about America's Legendary Judges

Sense and Sensibility and Sea Monsters