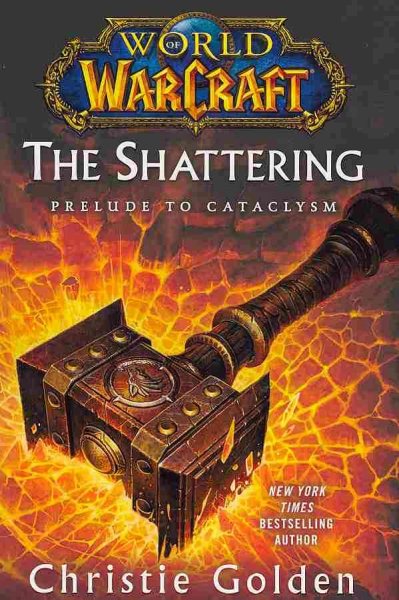 While Thrall seeks answers to the erratic behavior of the elemental spirits, King Varian Wrynn of Stormwind considers violent action to resolve the tensions between the Alliance and the Horde. Read More
His eyes were open now, watching the path of the tiny flame. If you continue your path, little spark, you will cause great harm.I must burn! I must live!There are places where your glow and heat are welcome. Find them, do not destroy the dwellings or take the lives of my people!For a second, he seemed to wink out of existence but then blazed back with renewed vigor.Thrall knew what he had to do. He lifted his hand. Forgive me, Brother Flame. But I must protect my people from the harm you would cause them. I have requested, I have begged, now I warn.The spark seemed to spasm, and yet he continued on his lethal course.Thrall, grim-faced, clenched his hand hard. The spark flared defiantly, then dwindled, finally settling down to nothing more than the faintest of glowing embers. For now, he would no longer do anyone harm.The threat had ended, but Thrall was reeling. This was not the way of the shaman with the elements. It was a relationship of mutual respect, not of threats and control and, in the end, destruction. Oh, the Spirit of Fire could never be extinguished. It was far greater than anything any shaman, or even group of shaman, could ever attempt to do to him. He was eternal, as all the spirits of the elements were. But this part of him, this elemental manifestation, had been defiant, uncooperative. And he had not been alone. He was part of a disturbing trend of elements that were sullen and rebellious rather than cooperative. And in the end, Thrall had had to completely dominate him. Other shaman were now calling rain to soak the city in case there was another aberrant spark that persisted in its course of devastation.Thrall stood in the rain, letting it soak him, pour off his massive green shoulders, and drip down his arms. What in the name of the ancestors was happening?New York Times bestselling and award-winning author Christie Golden has written thirty-five novels and several short stories in the fields of science fiction, fantasy and horror. Among her many projects are over a dozen Star Trek novels and several original fantasy novels. An avid player of World of Warcraft, she has written two manga short stories and several novels in that world (Lord of the Clans, Rise of the Horde, Arthas: Rise of the Lich King, and The Shattering: Prelude to Cataclysm) with more in the works. She has also written the StarCraft Dark Templar Trilogy, Firstborn, Shadow Hunters, and Twilight. Forthcoming is Devils’ Due, a StarCraft II novel focusing on the unlikely friendship between Jim Raynor and Tychus Findlay. Golden is also currently writing three books in the major nine-book Star Wars series Fate of the Jedi, in collaboration with Aaron Allston and Troy Denning. Her first two books in that series, Omen and Allies, are on shelves now. Golden currently lives in Colorado. She welcomes visitors to her website, www.christiegolden.com.***Thrall, wise shaman and the warchief of the Horde, has sensed a disturbing change . . . Long ago, Azeroth’s destructive native elementals raged across the world until the benevolent titans imprisoned them within the Elemental Plane. Despite the titans’ intervention, many elementals have ended up back on Azeroth. Over the ages, shaman like Thrall have communed with these spirits and, through patience and dedication, learned to soothe roaring infernos, bring rain to sun-scorched lands, and otherwise temper the elementals’ ruinous influence on the world of Azeroth.Now Thrall has discovered that the elementals no longer heed the shaman’s call. The link shared with these spirits has grown thin and frayed, as if Azeroth itself were under great duress. While Thrall seeks answers to what ails the confused elements, he also wrestles with the orcs’ precarious future as his people face dwindling supplies and growing hostility with their night elf neighbors.Meanwhile, King Varian Wrynn of Stormwind is considering violent action in response to mounting tensions between the Alliance and the Horde, a hard-line approach that threatens to alienate those closest to him, including his son, Anduin. The conflicted young prince has set out to find his own path, but in doing so, he risks becoming entangled in political instability that is setting the world on edge.The fate of Azeroth’s great races is shrouded in a fog of uncertainty, and the erratic behavior of the elemental spirits, troubling though it is, may only be the first ominous warning sign of the cataclysm to come. Read Less

Goodreads reviews for World of Warcraft: The Shattering: Prelude to Cataclysm

Valerian and the City of a Thousand Planets: The Official Mo...