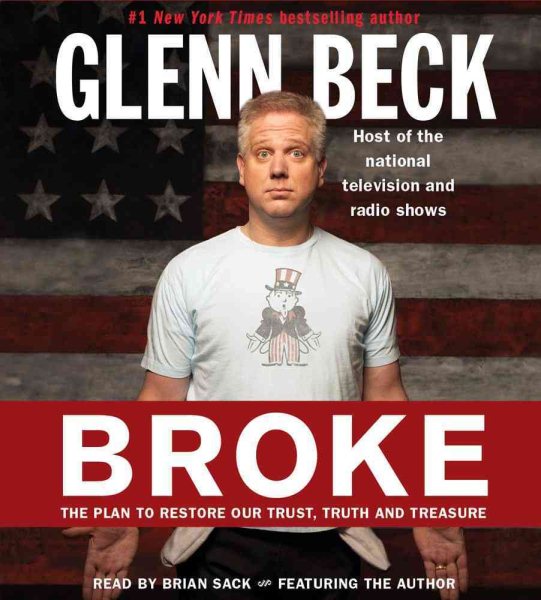 In a book timed for the midterm elections, the popular firebrand is back to tackle all the hot issues with his signature wit and confrontational, controversial style. By the #1 best-selling author of Arguing With Idiots. Simultaneous. Read More
#1 New York Times bestselling author and nationally syndicated radio host Glenn Beck showcases his distinctive humor in taking on the political landscape in his fight to fix America—before it’s too late.As the most important presidential election in our history looms, ask yourself: Are America’s finances in better shape than they were four years ago? Or are we still BROKE? THE FACTS. THE FUTURE. THE FIGHT TO FIX AMERICA—BEFORE IT’S TOO LATE. Our nation is financially broke, but that’s just a side effect of our broken spirit, our broken faith in government, the broken promises by our leaders, and a broken political system that has centralized power at the expense of individual rights. How did we get into this mess? Glenn Beck thinks the answer is pretty simple: Because we’ve turned our backs on the Constitution. Few of us have ever seen the whole picture, and politicians have done everything in their power to hide the truth. Broke exposes what we’re really facing—and how to fix it. Packed with great stories from history, invaluable teachable moments, and Glenn Beck’s trademark combination of entertainment and enlightenment, Broke makes the case that when you’re traveling in the wrong direction, slight course corrections won’t cut it—you need to take drastic action. Through a return to individual rights, an uncompromising adherence to the Constitution, and a complete rethinking about the role of government in a free society, Glenn exposes the idea of “transformation” for the progressive smokescreen that it is, and instead builds a compelling case that restoration is the only way forward. With this awareness, it’s much easier to develop a realistic plan for uniting all Americans around the concept of shared sacrifice. After all, this generation may not be asked to storm beaches, but we are being asked to do something just as critical to preserving freedom. Read Less

Goodreads reviews for Broke: The Plan to Restore Our Trust, Truth and Treasure