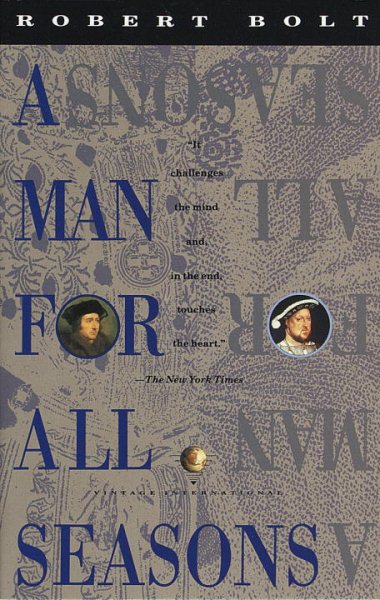 Consciences of Sir Thomas More and Henry VIII are poles apart in the religious conflict over the king's marriage to Anne Boleyn Read More
The classic dramatization of Sir Thomas More's historic conflict with Henry VIII—a compelling portrait of a courageous man who died for his convictions.Sir Thomas More—the brilliant nobleman, lawyer, humanist, author of such works as Utopia—was a long-time friend and favorite of Henry VIII, ascending to the position of Lord Chancellor in 1529. Yet he was also a staunch Catholic, and when Henry broke with the Church in 1531 after the Pope had refused to grant him a divorce from Catherine of Aragon, More resigned the Chancellorship. In 1534, Parliament passed a bill requiring all subjects to take an oath acknowledging the supremacy of England's king over all foreign sovereigns—including the Pope. More refused, was imprisoned, and finally was executed in 1535. An enduring modern classic, A Man for All Seasons "challenges the mind, and, in the end, touches the heart" (New York Times). Read Less

Goodreads reviews for A Man for All Seasons: A Play in Two Acts

A Man For All Seasons

The Tiger and the Horse: A Play in Three Acts