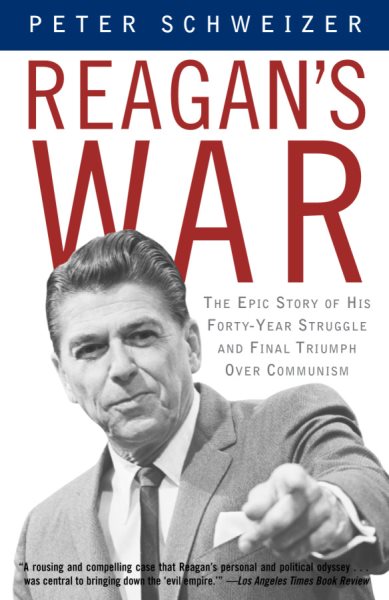 A leading historian of the Cold War takes a close-up look at Ronald Reagan and his fierce commitment to battling communism, from his role as a secret informer for the FBI and criticism of 1960s détente to his political and economic war against Moscow as president and his ultimate triumph over communism. Reprint. 50,000 first printing. Read More
Reagan’s War is the story of Ronald Reagan’s personal and political journey as an anti-communist, from his early days as an actor to his years in the White House. Challenging popular misconceptions of Reagan as an empty suit who played only a passive role in the demise of the Soviet Union, Peter Schweizer details Reagan’s decades-long battle against communism.Bringing to light previously secret information obtained from archives in the United States, Germany, Poland, Hungary, and Russia—including Reagan’s KGB file—Schweizer offers a compelling case that Reagan personally mapped out and directed his war against communism, often disagreeing with experts and advisers. An essential book for understanding the Cold War, Reagan’s War should be read by open-minded readers across the political spectrum. Read Less

Goodreads reviews for Reagan's War: The Epic Story of His Forty-Year Struggle and Final Triumph Over Communism

Profiles in Corruption: Abuse of Power by America's Progress...

Throw Them All Out: How Politicians and Their Friends Get Ri...

Do As I Say (Not As I Do): Profiles in Liberal Hypocrisy