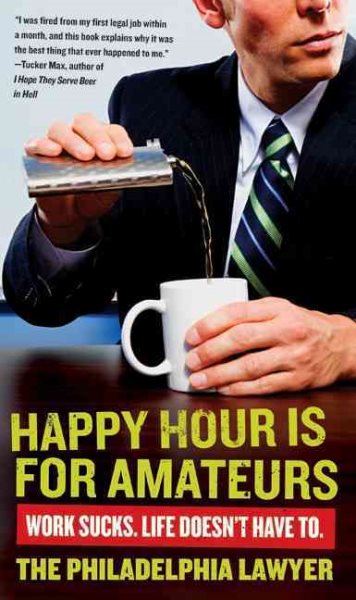 A memoir inspired by the popular anonymous blog presents a lawyer's drunken and debauched strategy for surviving inside the American legal system, in a work that satirizes office culture, exposes fraudulent practices that mark his profession, and describes his hedonistic nightlife. 25,000 first printing. Read More
Welcome to the world of the Philadelphia Lawyer-a man of two identities. By day he is a mild-mannered attorney, one who has practiced in a wide variety of legal fields from criminal to corporate to personal injury, earning himself a stellar reputation in the Philadelphia legal community as a hardnosed and astute litigator. By night, his drunken and drug induced escapades are all that keep him going, as he moves from bar to party to bed in the hopes that somehow he can escape the boredom and mental inertia of his job. Based on the anonymous blog called the Philadelphia Lawyer, HAPPY HOUR IS FOR AMATEURS is a juvenile, raucous, and entertaining memoir that follows the antics of one lawyer in Philadelphia from law school to law practice as he devotes 10 years of his life to one of our country′s most popular yet unsavory professions. Satirizing office culture like never before, his story offers a wry and hilarious look into the monotony of the nine to five workplace and the debauched release that goes on when the sun goes down. Whether it′s dabbling in S&M with buttoned-down career woman, chasing nitrous balloons with shots of Jim Beam, or overdosing on anti-nausea medication for cancer patients to stave off his hangover, HAPPY HOUR IS FOR AMATEURS is episodic escapism in its most enjoyable form, as one man does whatever he can to avoid the unfortunate realities of the law and excruciating tedium of office life. Read Less

Goodreads reviews for Happy Hour Is for Amateurs: Work Sucks. Life Doesn't Have To.

Happy Hour Is for Amateurs: A Lost Decade in the World's Wor...

The dialogues of Athing & other poems