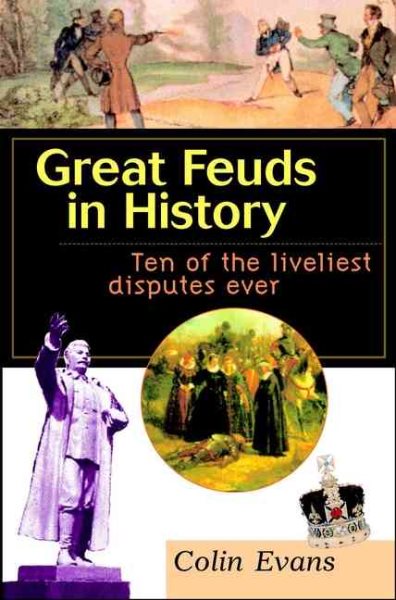 Looks at the animosities, ill feelings, and bad behavior of such public figures as Queen Elizabeth I, Aaron Burr, the Duchess of Windsor, Lyndon B. Johnson, and J. Edgar Hoover. Read More
Praise for Great Feuds in History "Everyone loves a good fight, especially on the world stage, and Evans calls these contests with skill and flair." -- Kirkus Reviews (starred review) "Evans captures all the drama and controversy in these streamlined accounts brimming with invigorated, well-paced prose." -- Publishers Weekly In Great Feuds in History, Colin Evans puts us in the middle of ten of history's most significant struggles-high-stakes personal conflicts that had a lasting impact on the societies around them and on generations that followed. Spanning five hundred years of political rivalry, spiritual conflict, and ancestral discord, here are ten fascinating true tales of ambition, greed, jealousy, passion, and fear that are as gripping and meaningful today as they were in their own turbulent times. * Queen Elizabeth I versus Mary, Queen of Scots * English parliament versus King Charles I * Aaron Burr versus Alexander Hamilton * The Hatfields versus the McCoys * Joseph Stalin versus Leon Trotsky * Roald Amundsen versus Robert Scott * The Duchess of Windsor versus the Queen Mother * Bernard Law Montgomery versus George Patton * Lyndon B. Johnson versus Robert F. Kennedy * J. Edgar Hoover versus Martin Luther King Jr. Read Less

Goodreads reviews for Great Feuds in History: Ten of the Liveliest Disputes Ever

Great Feuds In History - Ten Struggles That Shaped The World