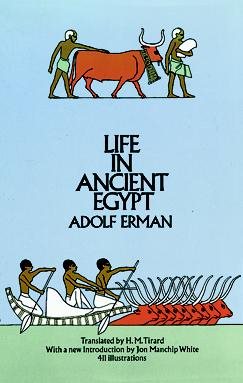 A classical history of social, political, cultural, and religious developments among the ancient Egyptians Read More
What was it like to live in the ancient land watered by the Nile, thousands of years before Christ was born? How did a man earn his living, what did he wear, where did he go in his leisure time? What was the relationship between an ordinary Egyptian and his government, his wife, his children? Was life for him grim or optimistic, difficult or easy, reverent or worldly? Did his people travel, explore, conquer? Were they very much different from those of the other great civilizations of antiquity, the Greek and the Roman? What was the nature of their science, art, magic, religion? If the past has lessons for the present, what can we deduce from ancient Egyptian life that is of value to us today?For generations, scholar, specialists, and general readers have been turning to a monumental sourcebook for the answers to such questions: Life in Ancient Egypt by Adolf Erman. It is one of the most influential and frequently consulted works on Egyptology ever written, a classic in its field and the basis of numerous other studies and works. It is still one of a very few books that offer the modern reader so satisfying, informative, and complete a survey in one volume.Erman, a rigorously trained scholar, Director of the Egyptian Museum in Berlin, and author of standard works on Egyptology, covers his subject thoroughly and with a wealth of interesting, concrete detail. He examines ancient Egypt’s political structure, crime and police systems, domestic life and kinships, dress, amusements, religion, learning, mathematics, magic and folk beliefs, literature, art, agriculture, trades, arts and crafts, commerce, warfare, and much else. His objective point of view, eschewing romanticism on the one hand and frigid pedantry on the other, gives us a treatment that is as trustworthy in fact as it is evocative in effect — as Professor Jon Manchip White says in his new introduction for this edition, “From first to last … a superb performance.” The scholar, the student and the merely curious can do no better than to go to this first, great authority on ancient Egypt. Profusely illustrated throughout. Read Less

Managing Transitions: Making The Most Of Change